Hi, I’m Jim. Welcome to my online magazine. This week’s issue looks at keeping your dreams alive and how to respond when they apparently die.)

Enjoy some hope and humor,

We all have dreams, no matter what age: to be a firefighter, a princess, a parent, a successful businessperson, pastor of a “mega-church,” a retiree in Florida. But somewhere between the womb and the tomb, those dreams die.

The Old Testment’s Joseph had a dream to be a great leader with his parents and brothers bowing down before him. But before that dream could be realized, his jealous brothers had ripped up the seventeen-year old’s “coat of many colors,” thrown him into a cistern, and sold him to Egyptian slave traders.

Even sincere Christians with God-given dreams find themselves bruised and bloodied at the bottom of a pit. That seems to be the rule, rather than the exception. [Continue reading]

God promises Joseph that he will become a great leader—and he ends up enslaved and imprisoned in Egypt.

The prophet Elisha promises an infertile woman that she will bear a son—and the boy dies in her arms.

Jesus promises to bring a heavenly kingdom to earth—and then he and the promise are crucified and buried.

Is this disturbing pattern playing out in your life? You sense that God gives you a dream job—and months later you’re laid off. (It happened to me—twice!) God miraculously fulfills your dream of a child—and now she’s clinging to life in neo-natal intensive care. It seems God has brought the man of your dreams into your life—and now he’s killed in a traffic accident.

When our dreams die, a part of us dies as well! [Continue reading] 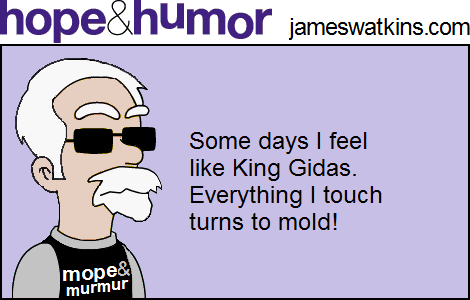 Get your daily dose on Facebook and on the archives. And follow my race for the White House at Watkins for President 2016.

Quips and quotations on dreams

God develops the dream where you are, not where you wish you were. Matthew Trexler

There are times when failure doesn’t mean that we’ve done anything wrong. It is simply that God’s time for success hasn’t yet come for us. God isn’t telling us to change the way we do things, but to wait on him—and in time to try again. There is a mystery to God’s timing that we can never fully understand, anymore than we know why one seed takes root and another doesn’t (Ecclesiastes 11:6). But one thing is certain: we’re often ready to abandon a dream long before giving up is justified. M. Blaine Smith

If you enjoyed this week’s issue, please share on your social networks. Thanks!