Hi, I’m Jim Watkins, and welcome to my online magazine. This week’s issue looks at last week’s tragic chapters in race relations. First, a feature article I wrote for Rescue magazine on the state of race relations. Then a look at various kinds of prejudice often seen in churches, a book excerpt on Martin Luther King, Jr.’s “commandments” for cultural change, and my most popular cartoon on evil.

Enjoy some hope and humor,

Race relations by the numbers

My memory of riding to Florida in the back of my grandfather’s Buick was the shock of seeing unpainted houses overflowing with poorly-dressed children, their bare feet painted red with Georgia clay. Growing up white in a white neighborhood and church, I stared at the foreign landscape and people outside the car window that seemed more National Geographic than LIFE Magazine. Black men, women, and children picked cotton under the unforgiving sun while white men sat in the shade of their pickup trucks.

But most troubling were the signs. When we stopped at one of the many Stuckey’s gas stations and souvenir shops, I was shocked by the “whites only” drinking fountains. Around back was a rusty spigot labeled “colored only” next to restrooms labeled “whites only” and “colored only.” Even as a second-grader, something deep inside me wretched at the idea of “us” and “them.” Me with my Keds sneakers heading to a Florida beach; them barefoot, slaving in a cotton field. Me, drinking from a sparkling fountain; them, their mouths under a dirty faucet. I feared what lurked behind the “colored only” restroom sign.

During my childhood, blacks began to organize and protest the “separate but equal” doctrine that had bred segregation in schools, businesses, and society in general. In 1954, the Supreme Court ruled in Brown v. Board of Education that state laws establishing separate black and white schools was unconstitutional. During my grade school, civil rights leaders such as Martin Luther King Jr., Rosa Parks, and others used nonviolent protest to awaken America to the plight of blacks.

Fifty years since my eye-opening trip to another world, seismic changes have rocked the landscape. More and more people of color have appeared in films and television. They have taken up roles in education, medicine, and government. And the “colored only” signs are gone. The first black secretaries of state were appointed by George W. Bush: Colin Powell and Condoleezza Rice. Previously, Powell was a four-star general serving as chairman of the Joint Chiefs of Staff, while Rice served as special assistant to President George H.W. Bush and then national security advisor under George W. Bush.

We now have a bi-racial president (his father, born in Kenya, is black; his mother, born in Kansas, is white.). In the Obama administration, two black attorney generals have served, as well as the Environmental Protection Agency administrator, trade representative, and United Nations ambassador. In January 2009, Obama’s inauguration promised the fulfillment of America’s hope for racial equality.

But in the past seven years, America has added Ferguson, white privilege, and Black Lives Matter to our cultural dictionary. While the Emancipation Proclamation of 1863, the Voting Rights Act of 1965, and the Civil Rights Act of 1968 have changed people of color’s legal status, their social status has not fared as well. [Continue reading]

Top ten signs your church may be prejudiced

Prejudice is not simply a “black and white” issue. There are many kinds of isolation between groups based on age or tastes, physical and mental challenges, levels of education, denominational doctrine, gender, politics and ideology, economics, as well as race and nationality.

We are all guilty of some form of prejudice—whether blatant or subtle. I have to admit I am extremely prejudiced against those who are prejudiced.

The essence of prejudice boils down to ignorance. [Continue reading] 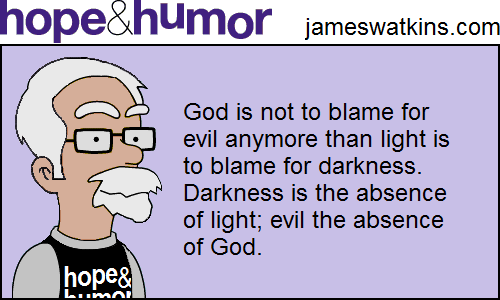 Get your daily dose on Facebook and on the archives. And follow my race for the White House at Watkins for President 2016.

Quips and quotations on cultural change

In April 1963, civil rights leader Martin Luther King, Jr. spelled out a radical strategy to change the culture of his time in his book, Why We Can’t Wait. Each participant in the Birmingham protests was required to abide by Dr. King’s “Ten Commandments.”

1. Meditate daily on the teachings and life of Jesus.

2. Remember always that the nonviolent movement in Birmingham seeks justice and reconciliation—not victory.

3. Walk and talk in the manner of love, for God is love.

4. Pray daily to be used by God in order that all men might be free.

5. Sacrifice personal wishes in order that all men might be free.

6. Observe with both friend and foe the ordinary rules of courtesy.

7. Seek to perform regular service for others and for the world.

8. Refrain from the violence of fist, tongue, or heart.

9. Strive to be in good spiritual and bodily health.

10. Follow the directions of the movement and of the captain on a demonstration.

If you enjoyed this week’s issue, please share on your social networks. Thanks!