During this week before the 15th anniversary, here’s a look back at some hopeful and helpful posts since that horribly historic day.

We are strong! We will survive!

September 17, 2001 Like any print and online journalist worth his or her press card, I’ve scrambled to comment on this unbelievable tragedy.

It seems that these cold-blooded attacks only serve to reveal America’s strengths. [Continue reading].

September 11, 2006 For those of us glued to our TVs on September 11, 2001, certain images are forever burned into our brains: the planes exploding into the World Trade Towers, the towers collapsing upon themselves, the blood- and soot-covered faces… [Continue reading]

We light this candle

September 11, 2001 On the evening of September 11, 2001, our small community gathered at LaOtto Wesleyan Church north of Fort Wayne, Indiana, for this liturgy written by its pastor, my wife Lois. [A liturgical reading following an attack]

Reacting
• Dealing with death and grief
• “bin Laden, kiss my pass!” (September 10, 2003)
• Talking to your children about terrorism

Reasoning
• What motivates terrorists?
• Taking the terror out of terrorism 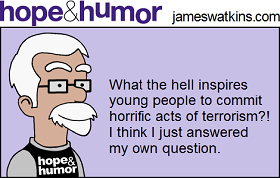 I wish I had something humorous to share today, but I’m afraid I don’t. I do have hope that God will provide comfort for those hurting today here and around the world. And that hell itself cannot stop his power and providence.

Quips and quotations on 9/11

Today, our fellow citizens, our way of life, our very freedom came under attack in a series of deliberate and deadly terrorist acts. The victims were in airplanes or in their offices: secretaries, business men and women, military and federal workers, moms and dads, friends and neighbors. Thousands of lives were suddenly ended by evil, despicable acts of terror. The pictures of airplanes flying into buildings, fires burning, huge — huge structures collapsing have filled us with disbelief, terrible sadness and a quiet, unyielding anger. These acts of mass murder were intended to frighten our nation into chaos and retreat. But they have failed. Our country is strong. A great people has been moved to defend a great nation. President George W. Bush (September 11, 2001)

Ten years have passed since a perfect blue sky morning turned into the blackest of nights. Since then we’ve lived in sunshine and in shadow, and although we can never unsee what happened here, we can also see that children who lost their parents have grown into young adults, grandchildren have been born and good works and public service have taken root to honor those we loved and lost. New York mayor Michael Bloomberg (September 11, 2011)

If we learn nothing else from this tragedy, we learn that life is short and there is no time for hate. Wife of Flight 93 pilot Sandy Dahl

Tonight, I ask for your prayers for all those who grieve, for the children whose worlds have been shattered, for all whose sense of safety and security has been threatened. And I pray they will be comforted by a power greater than any of us, spoken through the ages in Psalm 23: “Even though I walk through the valley of the shadow of death, I fear no evil, for You are with me.” President George W. Bush (September 11, 2001)

Read more quotations of hope at Why? Over 1,000 Quotations on Life’s Most Difficult Questions.

All writing copyright © James N. Watkins and is protected by United States and international law. For permission to print or repost, please visit my press page.

If you found this week’s issue helpful, please share on your social networks. Thanks!