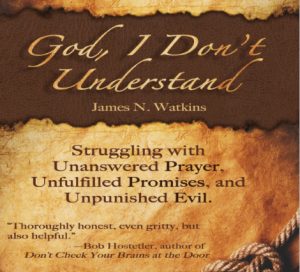 In July, Joshua Harris, the author of the best-selling—and controversial—book, I Kissed Dating Goodbye, as well as former pastor, publicly announced he no longer considers himself a Christian, left his wife and now is a vocal supporter of the LGBTQ movement.

Serious questions about faith are nothing new. But publicly proclaiming them to a worldwide audience is new! These influential voices feel it’s their obligation to struggle online.

In my book, God, I Don’t Understand, I write how Asaph, Kings David and Solomon’s musical director watched the glorious rise Israel and the building of the magnificent Temple as well as the moral collapse and complete destruction of Jerusalem and the Temple. His writing (Psalms 50, 73-83) is filled with raw, honest anguish as he struggled with unanswered prayer, unfulfilled promises, and unpunished evil.

But here’s the huge difference. While Asaph struggled publicly, he never rejected his faith—publicly or privately:

Look at these wicked people—
enjoying a life of ease while their riches multiply.
Did I keep my heart pure for nothing?
Did I keep myself innocent for no reason?
I get nothing but trouble all day long;
every morning brings me pain.
If I had really spoken this way to others,
I would have been a traitor to your people.
So I tried to understand why the wicked prosper.
But what a difficult task it is! (Psalm 73:12-16).

I love Asaph’s honesty as he struggles with his faith. It encourages us that we are not alone in our questions! So, nope, nothing wrong with mind-wrenching questions about God and his ways!

His doubts were eventually resolved:

In fact, nearly all his psalms begin with a question and end with the affirmation that God is still real and still in control.

For over 200 pages I describe how Asaph “finally understood.” And he admits that some things are simply beyond our human minds to comprehend.

So, my issue is not with questions, but with going online to arrogantly proclaim rejection of faith and God’s Word. I want to pray for these two influential men and to lovingly, graciously warn them of what Jesus said:

“But if you cause one of these little ones who trusts in me to fall into sin, it would be better for you to have a large millstone tied around your neck and be drowned in the depths of the sea” (Matthew 18:6).

There is no greater sin than to reject God—unless it’s to cause others to reject him as well.

[My book on Asaph’s—and our own questions—is getting a new title, God, I Don’t Understand. but for now you can find it on my website.]

If this was helpful, be share it on your social networks. Thanks!