We are strong! We will survive! 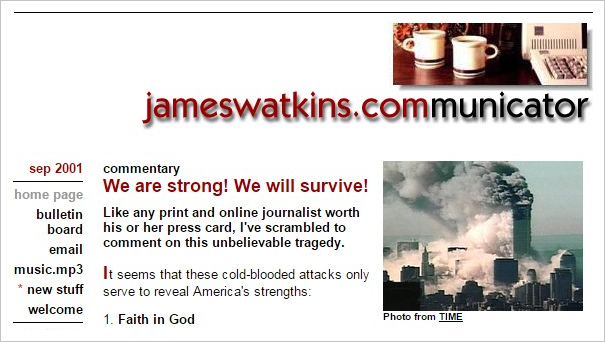 Like any print and online journalist worth his or her press card, I’ve scrambled to comment on this unbelievable tragedy.

It seems that these cold-blooded attacks only serve to reveal America’s strengths:

Soon after the terrorist attacks, the President asked Americans to join him in “a moment of silence. May God bless the victims, their families, and America.”

During the noon news, the nearby “soft rock” station, interrupted its broadcasting to ask a prominent local minister to pray on the air for the victims and for the country. That evening churches across the nation, including our small church, opened their doors for special prayer.

No doubt, 2 Chronicles 7:14 was a part of many of the Scripture readings:

If my people, who are called by my name, will humble themselves and pray and seek my face and turn from their wicked ways, then will I hear from heaven and will forgive their sin and will heal their land.

Even the most non-religious seem to admit—at least in times of crisis—”In God We Trust.”

Despite the bad rap families have gotten in recent years, the first thing people did was to get on the phone and email programs to contact family members. Even as the planes were being high-jacked, terrified passengers used cell phones to tell spouses “I love you.”

America is still a land of “family values.”

3. A sense of morality

Not only were the atheists strangely quiet Tuesday, but I didn’t hear one member of the ACLU or the “Politically Correct Police” plead for tolerance and acceptance of the terrorists’ cultural and religious beliefs. Perhaps their pious pronouncements about moral relativism would have been seen for the “slippery slope” that they are.

If morality is simply a cultural covenant, then the celebrating by some people in Islamic and Arab countries is completely justified. The Koran teaches that Muslims have a moral duty to kill “infidels.” The end (bringing judgment upon the “capitalists devils of America”), justifies the means (coldly killing hundreds, if not thousands, of innocent lives). Not too different than promising medical advances at the expense of unborn lives, but that’s another column.

It’s good to know that there are still some acts that prompt “moral outrage.”

4. An awareness of mortality

I live in a small town that doesn’t appear on international atlases (or even many national maps), so when military aircraft from the nearby Air Force Reserve unit roared over head last night, I wasn’t too concerned it might be a terrorist attack. (Okay, it did take a while to get back to sleep.)

America itself had slept fairly soundly believing that terrorism had datelines only from London, Belfast, Jerusalem, and other “international” locations. There had been no international attacks on American soil since Pearl Harbor (and at the time, Hawaii was not even a State.)

Now anyone who has ever visited the Big Apple and Washington D.C. or flown in a commercial airliner feels vulnerable. (According to a USA Today poll, one day after the tragedy 58 percent of 671 adults were “very worried” and “somewhat worried” that they would become a victim of terrorism. Only 16 percent were “not worried at all.”)

In just two weeks, I’ll be speaking at a conference north of Washington, D.C. So, when I kiss my wife goodbye at the airport and when I call my adult kids to tell them “I love you,” it will be with a bit more emotion and just a bit of apprehension that my flight could be featured on CNN.

During this tragedy we would do well to remember that when we step onto a plane – or simply go to work at the office – we have no money-back guarantee that we will return safely to our home and loved ones. And, thus, a reminder to love our families and live our lives with that sense of mortality in mind.

My friend and former newsman, Jim Stanley, wrote that the “tragic destruction of human life and important buildings . . . was not even a blip on the radar screen in terms of destroying the essence of our country. We remain free, democratic and filled with love, respect and compassion for one another.”

We are strong. We will survive. But only if we remember from where our strength comes.