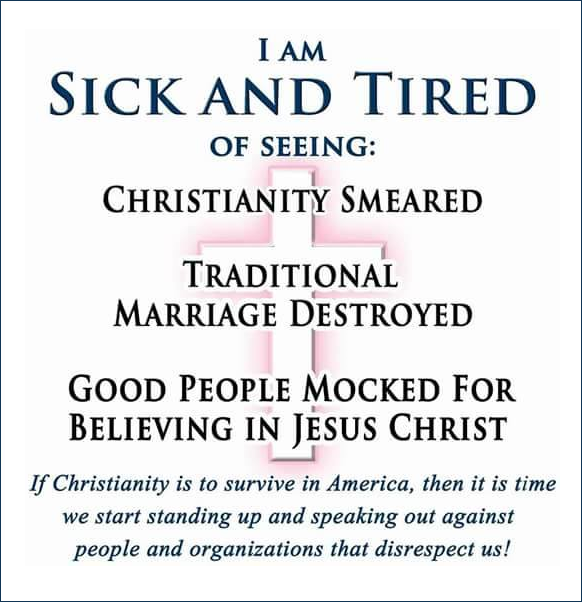 Have you seen the above meme making its rounds on social media? This is just one of the many along with posts painting a bleak portrait of Christianity in America.

For instance, Ken Ham, the president and CEO of Answers in Genesis, warned in his organization’s newsletter that it might not be long before the Bible is banned in the Western world. He commented on a prison chaplain being fired for quoting Scripture:

This is an alarming example of how quickly Christians are losing religious freedom across the West. In this case, it wasn’t even acceptable for this chaplain to use God’s Word during a chapel service—a completely voluntary service where those attending would expect to hear from God’s Word. It won’t be long before we see this happening in other countries, including America.”

The American Library Association would seem to add credence to Ham’s concern. In its 2015 list of “Most Challenged Books,” The Holy Bible ranks number six due to “religious viewpoint.” (Fifty Shades of Gray ranks number two.) Other books on the list were challenged due to offensive language, explicit sex, homosexuality, inaccuracies, political viewpoint, and atheism.

As someone who desires to follow Jesus accurately and authentically, I immediately ask myself, How does all this square with his teaching as well as the actions of his early followers? Here are some observations:

Jesus taught that persecution is inevitable

“Rejoice and be glad, for your reward is great in heaven, for so they persecuted the prophets who were before you” (Matthew 5:12).

I’m always surprised when American Christians are shocked that they are being persecuted for their faith. (And American’s definition of “persecution” pales in comparison to what believers in Syria, Iraq, North Korea or Saudi Arabia are facing).

“But I say to you, Love your enemies and pray for those who persecute you” (Matthew 5:44).

Paul, who was beheaded by Rome, wrote, “Bless those who persecute you; bless and do not curse them” (Romans 12:14).

I don’t see anywhere in the gospels or letters the command to “start standing up and speaking out against people and organizations that disrespect us!” Nope. No boycotts. No protests. And especially, no violence!

Ham’s editorial neglected an important point. Rev. Barry Trayhorn, a Pentecostal minister, served as a government employee, working as a prison gardener. His termination of employment came when, after warnings, he read the following passage at a service: “Or do you not know that the unrighteous will not inherit the kingdom of God? Do not be deceived: neither the sexually immoral, nor idolaters, nor adulterers, nor men who practice homosexuality, nor thieves, nor the greedy, nor drunkards, nor revilers, nor swindlers will inherit the kingdom of God” (1 Corinthians 6:9-10).

Trayhorn was working for “Caesar” and violated the emperor’s rules.

Jesus taught to be wise as serpents, gentle as doves

It takes great wisdom to thread the legal challenges.

Christians who serve as public school teachers, work in secular counseling centers, businesses and factories, have First Amendment rights, but must be “wise as serpents, gentle as doves” (Matthew 10:16), in following the letter and spirit of the law.

Jesus taught his followers to not be jerks

Okay, maybe Jesus didn’t use those exact words, but many times when believers cry “persecution,” they are not following the Bible’s strategy for engaging the culture:

Respond by “speaking the truth in love” (Ephesians 4:15).

“Walk in wisdom toward outsiders. . . . Let your speech always be gracious . . . so that you may know how you ought to answer each person” (Colossians 4:5-6).

The Bible is filled with believers who stood up to godless governments—from Daniel to the disciples—but always respected the government by submitting to the consequences of disobedience.

We need to look to our brothers and sisters in countries where churches and Bibles are currently banned—and, yet, Christianity is thriving—for our example.

• Pray for those who are facing life and death persecution.

• Pray that those being persecuted will face it with love, grace and courage.

James Watkins is an author and speaker who had the privilege of ministering in a country where Christians have been brutally persecuted and was amazed at their commitment and courage.