Immediately after the September 11 terrorist attacks, the U.S. Homeland Security created a color-coded threat chart. Here’s what I wrote in December 2003, when the director, Tom Ridge, ratcheted the terrorist threat color from “Yellow: Elevated” (mild panic) to “Orange: High (moderate paranoia). The chart was finally retired, perhaps due to my mockery of it in my newspaper column at the time. I tried to put the color code in perspective with a color code for life in general.

Despite the horrific news that a shark bit off the left arm off a 13-year-old surfer earlier this year, shark attacks are extremely rare. In fact, on an average year, one or two people are killed by shark attacks off U.S. shores. So, sharks are very, very “Green: Low” (complete apathy).

There were no fatal airline crashes in the U.S. in 1998. Only eleven passengers were killed in the only domestic crash in 1999. And only 92 were killed in 2000.

Dr. Arnold Barnett, of the Massachusetts Institute of Technology, has done extensive research to show the odds of being killed in a plane crash is one in 7,000,000! For airline fatalities to equal auto fatalities, a sold-out 727 jet would have to crash every day of the week, with no survivors, to equal the 46,000 highway deaths per year in the United States! So, flying on a commercial airliner: GREEN

Every 19 minutes a person is killed at home, with two-thirds of those being fatally injured in the bathroom! That’s 28,200 fatalities each year. So, your very own bathroom: BLUE.

A Centers for Disease Control and Prevention study reveals the average number of deaths caused by the flu virus increased from 20,000 in the 1970s to 36,000 in 1999. This year’s death toll could reach 50-70,000. Forget terrorists. Avoid anyone with a cough. Flu is BLUE!

As noted earlier, automobiles take an average of 40,000 lives per year. So Toyotas are nearly twice as dangerous as toilets. Driving your car: YELLOW. And driving/riding without a seatbelt is just plain RED!

A 1999 report charged that 98,000 hospitalized patients died each year in the Unites States due to “medical errors.” That’s equal to over 900 airline crashes, so hospitals: ORANGE!

On September 11, 2001, nearly 3,000 innocent lives were snuffed out. The very next day, that same number were killed. And the day following that. That’s the number of unborn babies aborted every day in America. That’s over a million deaths per year, so a mother’s womb: RED.

Using these statistics, in general, risk of death in the U.S. of A is still solidly GREEN.

So, if your children are concerned with all the media attention concerning “Code Orange” threat of a terrorist attack, simply share this column.

Remind the kiddies that they’re much more likely to be killed going potty or “bye bye” than by a terrorist attack. Okay, maybe not a good idea. How ’bout, “Billie in day care is more likely to kill you with the flu than Osama bin Laden with a planeload of people”? Still, no good.

How ’bout simply letting them know that life can be dangerous (hot stoves, electrical outlets, and poisons)? But if we take reasonable precautions (don’t chew on electrical cords, wear our seatbelts, and not smoke) we can be solidly GREEN.

Just be very careful in the bathroom.

Wishing you a GREEN color code!

If you chose to drive rather than fly this Thanksgiving weekend, I hope you’re back home safe and sound – and not one of the 570 killed in auto accidents in the past few days. As I’ve written before, flying is still the safest form of transportation.

Let’s put it in perspective. According the Carol Hallet, president and CEO of the Air Transport Association, the average airline flight carries 106 passengers. So let’s put the annual average of deaths in the perspective of plane loads of victims. (Statistics from United States National Center for Health Statistics)

Dr. Arnold Barnett, of the Massachusetts Institute of Technology, has done extensive research to show the odds of being killed in a plane crash is one in 7,000,000! For airline fatalities to equal auto fatalities, a sold-out 727 jet would have to crash every day of the week, with no survivors, to equal the 46,000 highway deaths per year in the United States! 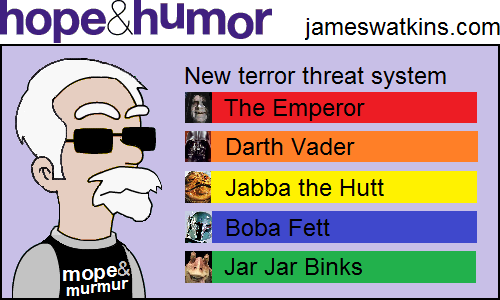