‘Twas the night before voting 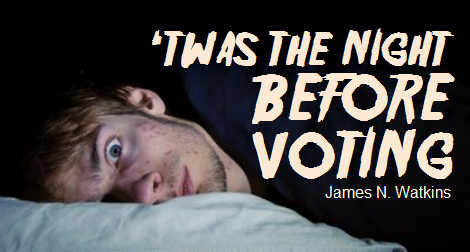 ‘Twas the night before voting, and all through the land,
Voters were fretting and wringing their hands.
Their clothing set out for the very next day
But how would they vote? Not a person could say!

So while they did toss, as they turned in their beds,
Visions of corruption were dancing in heads.
And mamma with her Xanax, I with Prozac,
Tried to settle our nerves with too many snacks.

When out on the lawn there arose such a clatter,
I sprang from the bed to see what was the matter.
Away to the window, I flew like The Flash,
Tore open the shutters and threw up the sash.

When what to my wondering eyes should appear
But a choir of angels saying “Don’t fear.”
“Relax, for behold we bring you direction
“God’s still in control despite this election!”

“He controls the course of all worldly events,
“He can remove kings and grant their replacements, 1
“God’s plans are pleasing, they are perfect, so good2
“His universe runs precisely as it should.”

“So go vote your faith, and then turn with a jerk
“For God will continue to do his good work.”
“Now go back to bed and please get a good rest,
“God’s working all out for the ultimate best. 3

Then spreading his wings, Michael gave a shrill whistle,
Away they all flew like the down of a thistle.
But I heard them exclaim as they flew out of sight,
“God is still sovereign . . . even election night!” 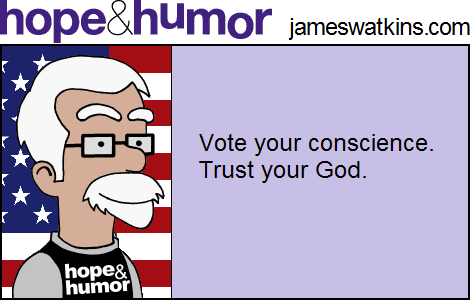