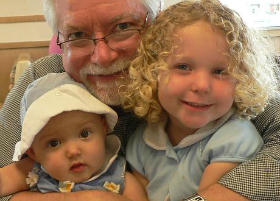 Methylenedioxymethamphetamine (I hope I spelled that correctly) goes by the name of MDMA (I can spell that), “Ecstacy” and “the Hug Drug.”

The hug drug is classified as a psychotropic or “mood-altering” drug. Other drugs in this category include antidepressants, cocaine, heroin, LSD, marijuana, nicotine, ritilin and caffeine (I always feel much better after massive doses of dark chocolate).

Nasty side effects of the hug drug include dizziness, nausea, confusion, and hallucinations. It’s considered “extremely dangerous,” so I’m not pushing its use.

I am, however, pushing a perfectly safe alternative to the hug drug: hugs. Real hugs—not drugs—are actually good for your health. According to social scientist Virginia Satir, “You need four hugs a day for survival, eight for maintenance and 12 for growth.”

John Naisbitt also praised hugs in his 1982 best-seller Megatrends. One of the trends he predicted was an emphasis on “High Tech/High Touch.” “In a world of technology, people long for personal, human contact.”

I wrote the The Hug Therapy Book, a parody on therapy, because I wanted to share a serious message about the power of nonsexual touch in a playful way. However, I don’t want people to take touching and hugging for granted as just a ‘nice’ gesture or judge it as gimmicky or sentimental.

Hugging is an intimate form of touch. We are suffering in our society from a sad condition best described as touch deprivation, skin hunger and hug inhibition. We need to recognize that every human being has a profound physical and emotional need for touch – men and women and children. And even our animal companions!

Scientific research has shown that hugging makes us feel better about ourselves and our surroundings, has a positive effect in a child’s development and IQ, and causes measurable physiological changes in the hugger and hug-ee. (Research has also documented the physical and psychological damage to children who were not held and hugged as infants.)

Of course Internet nitwits were quick to exploit this phenomenon. One site offers, and I quote:

Hug Therapy For a mere $15 per half hour, you can experience total release and contentment through the simple, yet rare, experience of human contact. Our professional team is trained in a variety of hug-therapy techniques, and will be happy to guide you to a land of decompression.

I emailed for details and received several offers for less than Platonic body contact.

Nonsexual hugging has some major advantages over “the hug drug” and other mood-altering drugs.

A hug is free. It’s beneficial physically and emotionally, with absolutely no adverse side-effects (unless you’re being hugged by a bear or professional wrestler). It’s energy efficient, ecological sound, requires no special equipment or training, licenses, prescriptions, tax forms, dealer prep or destination charges. And, unlike high tech equipment, hugs never need recharging, don’t come with a 300-page instruction manual, and never, ever lock up or crash.

So get high on hugs—not drugs.