Your best year yet 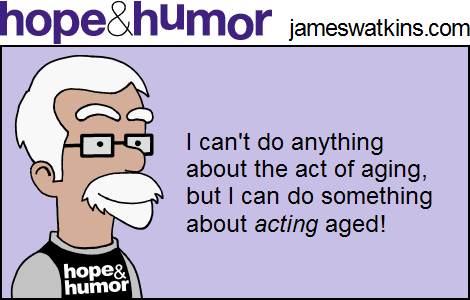 Some birthdays are traumatic. For me, three have been downright disturbing.

I breezed right past the big 3-0 with absolutely no trauma. It was a great year with a new job as an editor in my denomination’s youth department. I had wonderful wife, a beautiful three-year-old daughter, and a second child on the way.

But 33 proved disturbing! By that age, Jesus had accomplished his life’s work . . . and had gone Home early. I felt I had accomplished nothing compared to what the Son of God had done in the same amount of years. (I know, I know, it’s totally irrational, but I’ve never claimed to be “rational.”)

The big 4-0 however, was indeed traumatic. Forty is “over the hill” and celebrated with black balloons, depressing cards, and gag gifts such as Arthritis-Strength Tylenol, Preparation H and adult diapers. The church my wife was pastoring at the time “kidnapped” me to Chuck-E-Cheese “Where a Kid Can Be a Kid.” I carried a token on my key ring for the next ten years to remind myself I was still a kid.

The 6-0 was no biggie. I celebrated the time of my birth—7:03 am—at Chicago O’Hare’s Starbucks with a blueberry scone and then a pizza that night at the hotel in Oakland while I read a gigabyte of electronic birthday greetings.

However, 62 is proving truly traumatic. Fearing that Social Security may not be around when I turn 67, I opted to take it early and get out whatever I can before the retirement age is raised to 101 and the ponzi scheme collapses completely. So, I have arrived at the official age of geezerdom: “Retired on Social Security.” (I think I aged ten years just typing that phrase!)

However, let the record show I have no intention of retiring. To quote one of my favorite songwriters, Rich Mullins, “I’m gonna keep on rockin’ until it’s my time to roll.” Not only are the Rolling Stones still rocking well into their 70s, but the Bible promises that turning 62 is not the end of this earthly gig:

Even in old age they will still produce fruit;
they will remain vital and green (Psalm 92:14).

So, I am going to claim that promise to continue to “produce fruit” with my writing and
speaking. I am going to try to “remain vital and green” by learning new things, adapting new methods, and hanging around younger people. And I am going to wish myself the very same greeting I send to all my Facebook friends:

“Happy b’day! Praying this is your best year yet.”

That’s my prayer and intent for my 62nd year.