With the popularity of The Living Bible, The Message, and other paraphrases of the Bible, perhaps it’s time for this version featuring:

• Eve at the New Age boutique
• David and the giant editors
• Psalm 23 for geeks
• Daniel and the hostile takeover
• ‘Blue Light’ over Bethlehem
• Dr. Freud and Mr. ‘Legion’
• Mary and Martha Stewart
• The New Testament Smoke House
• 1 Corinthians 12 for writers

Eve at the New Age boutique

“Well, my lovely, we have the latest New Age literature and music, as well as a complete collection of the finest spiritually enhancing crystals.”

“Well, I was really only looking for Yanni’s latest CD, but as long as I’m here, I guess it wouldn’t hurt to look around.”

“Of course, it wouldn’t, my innocent child. Where did you get an idea like that?!”

“Well, we were told to stay away from this section of town or we could . . . die. I’m not exactly sure what that is, but it sounds rather unpleasant.”

“What intolerant and unenlightened being told you that? You won’t die! Our spirits are eternal. Haven’t you read any of Deepak Chopra’s books?”

“Well, you’ve come to the right place. At Sir Pent’s Crystal Castle, we have books, CDs, DVDs, and crystals that will open your eyes to the spiritual world all
around you. In fact, you can sign up for our weekly spiritual enlightenment seminar and become like God herself.

“Well, that does sound interesting.”

“Of course, it does. Your eyes will be opened and you will embrace your own inner divinity. Here, just try on this beautiful 24k gold necklace with the spiritual enlightenment crystal setting. Isn’t it lovely?”

Daniel and the hostile takeover

And it came to pass that Daniel and his three co-workers Chad, Mike, and Ben were forced to relocate from their Jerusalem office to Babylon following a hostile takeover of their company by the NebCo Corporation.

The CEO of NebCo ordered his Vice President of Human Resources to select the best informed and best qualified employees from the Jerusalem office and then teach them the corporate culture of NebCo. And yea, Daniel, Chad, Mike and Ben were all selected for the program and moved to the top floor where Ashley, the corporate trainer, was assigned to work with them for three years. They were given corner offices, keys to the executive washroom and fitness center, as well as being served at the private cafeteria.

And behold, all four showed real promise until roast pork was the main entree at the cafeteria. Being good Jewish boys, they had determined not to defile themselves, even when working for a Gentile company. So Daniel asked the corporate trainer for permission not to defile himself.

But Ashley answered Daniel saying, “Look, I could lose my job and dental plan if the four of you aren’t in the best mental and physical shape.”

So Daniel suggested a compromise. “If you’ll let us eat from the salad bar for the next ten days, then you can test us against those in the program who are eating pork and drinking wine, and see who performs best. At the end of ten days Daniel, Mike, Chad, and Ben were looking buff and aced their training exams, so Ashley put the whole group on a Kosher diet.

Now the CEO of NebCo was seriously into New Age and eastern mysticism. So he sent a memo to everyone in the company, from the shipping clerks to VP’s, that they were required to attend a mandatory seminar on Zen Management where an offerings to the God of Commerce would be presented.

Daniel was out of town on business on the day of the seminar, but Chad, Mike, and Ben stayed behind in their offices while everyone from shipping clerks and VP’s went off to the corporate board room to honor the God of Commerce. The board room was filled with the sound of tinkling crystal and the smell of incense as the CEO’s administrative assistant began taking attendance.

“Sir,” she said. “Those four VP’s from Jerusalem aren’t here, but it doesn’t surprise me. They pay no attention to the memos you channel, and never once, have shown up for the yoga and spiritual enlightenment seminars we offer.”

And behold, the CEO was furious and had security bring them before him. “Chad, Mike, and Ben, I gave you specific orders that this was a mandatory meeting. Now, you will attend this meeting or you’ll be fired. In fact, I’ll fire each of you seven times, so you’ll never work again. Do you understand me?” he shouted with the veins on his neck bulging. “You’ll starve to death!”

But Chad, Mike, and Ben, replied, “We do not need to defend ourselves before you in this matter. If we are fired-even seven times-the God we serve is able to provide for us. But even if God does not, we will not compromise our beliefs.

Then the CEO had security confiscate the keys to their offices and the executive washroom. And, yea, it came to pass security threw them out on the street seven times.

But Chad, Mike, and Ben, invested their remaining money in a small start up company introducing a lap top abacus, and made millions of dollars and eventually orchestrated a leveraged buyout of NebCo.

ATTENTION SHOPPERS. Now for the next three minutes, at the flashing blue light, we have on sale this beautiful hand-crafted teak wood nativity set. Each figure is elegantly clothed in beautiful satin and . . .

. . . she brought forth her firstborn son, and wrapped him in swaddling clothes, and laid him in a manger, because there was no room for them in the inn.

While you’re there, be sure to see our three-foot weather-proof hand-painted plastic nativity figures. They’ll look perfect on your front lawn. Plus they come complete with 100-watt bulbs and . . .

. . . there were in the same country, shepherds abiding in the field, keeping watch over their flock by night. And, lo, the angel of the Lord came upon them, and the glory of the Lord shone round about them: and they were sore afraid.

In our hardware department burglar alarms and security lights are on sale this week only. And in our sporting department, check out the low prices on our rifles, shotguns, and . . .

. . . and the angel said to the, Fear not; for behold, I bring you good tidings of great joy, which shall be to all people. For unto us is born this day in the city of David a Savior, which is Christ the Lord.

. . . And in our toy department, GI Joe action figures are just half price. And see the entire Star Wars collector featuring the all new light sabers, death rays, and . . .

. . . suddenly there was with the angel a multitude of the heavenly host praising God and saying, Glory to God in the highest, and on earth peace, good will to men.

And don’t forget, Santa Claus will be arriving in just a few moments. The first ten boys and girls will receive a special gift from Santa and . . .

. . . they came with haste, and found Mary and Joseph, and the babe lying in a manger.

We hope you’ve found everything on your list, to make this a joyful Christmas. Please come again, and . . .

. . . the shepherds returned, glorifying and praising God for all the things that they had heard and seen.

“Mr. Legion, I’m Dr. Freud,” the psychiatrist mumbled without looking up from the scroll he was studying. “The Decapolis Superior Court has ordered a complete psychological evaluation following your latest arrest for-let’s see, here it is,” he said unrolling the lengthy scroll. “Trespassing on public property, indecent exposure, creating a public nuisance, disturbing the peace, presenting a threat to self and others, resisting arrest, and self mutilation by an unlicensed body piercer. Would you be more comfortable lying on this couch?”

Legion glared at the psychiatrist, growled, and tugged against his strait jacket and the heavy chains holding him to the chair.

“Oh, sorry,” Dr. Freud quickly apologized glancing up from his notes. “Just stay right where you are. So, tell me about your relationship with your mother.”

Legion screamed, then tore the straitjacket to shreds and broke the chains restraining him.

“Hmmm?” Dr. Freud murmured stroking his goatee. “Apparently we have some unresolved issues with our mother, as well as being an exhibitionistic hebephrenic schizophrenic with a definite tendency toward psychoses, no doubt the result of traumatic toilet training.”

Legion picked up the psychiatrist’s couch and smashed it against the wall.

“That’s good! I’m glad to see that you’re getting in touch with your real feelings. Your superego has obviously been repressing your id, leading to these antisocial ego manifestations.”

Legion picked up the psychiatrist by the throat.

“Hmmm?,” Freud gasped trying to speak through his constricted windpipe. “Your aggression toward authority figures obviously is related to unresolved issues with your Oedipus Complex. I would suggest, at least a year of deep psychotherapy where we would work on the mental, social, and physical issues that are manifesting themselves in these outbursts. Now, if you would please put me down, we’ll set up appointments with a medical doctor-those cuts look infected-as well as a nutritionist-you really must stop eating things you find under rocks. And of course, stop by the mall for some new clothes. Guard would you please (gasp) escort Mr. Legion back to his cell?”

When the crowd came to Jesus, they saw Legion who had only moments ago been screaming and streaking through the cemetery, sitting there, dressed and in his right mind.

Jesus said to the man, “Go home to your family and tell them how much the Lord has done for you.

[The domestic diva and her sister have moved to a new site.] 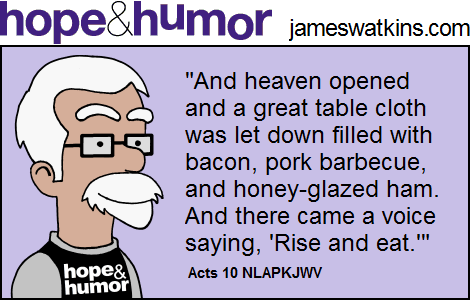 Now the body is not made up of one part but of many. If a writer should say, “Because I have not been published in Focus on the Family, I do not belong to the body,” it would not for that reason cease to be a part of the Body. If the whole body was writing for Guideposts, who would write for take-home papers?

But in fact God has arranged the parts of the body, every one of them, just as he wanted them to be. If they were all one part, where would the body be? As it is, there are many kinds of writers, but one body.

But God has combined the members of the body and has given greater honor to the parts that lacked it, so that there should be no division in the body, but that its parts should have equal concern for each other. If one part receives a rejection slip, every part suffers with it; if one part signs a contract with Tyndale House, every part rejoices with it.

Now you are the body of Christ, and each one of you is a part of it.

If you enjoyed this site, please share it on your social networks. Thanks!