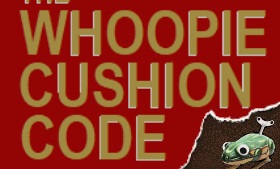 “The Bible is filled with hidden humor.” That’s the contention of Dr. Harrison “Harry” Tikk, a para-archeologist who claims to have discovered The Whoopie Cushion Code. Written on a tanned sheep bladder—thought to be the world’s first novelty item—the ancient writing fills in gaps of biblical history with “holy humor.”

For instance, the document reveals that it was Abraham, speaking to the Pharaoh, who first uttered the classic comedy line, “Take my wife . . . please.”

Tikk’s discoveries are somewhat controversial, however, in replacing the ten plagues of Egypt with his list of “Top Ten Practical Jokes of All Time” including fake blood, rubber snakes, and wind up frogs. And, of course, the Hebrews were the inventors of the dribble flask, clay doo-doo, and manna that turned your mouth blue.

Tikk also claims to have decoded Moses’ long-lost opening to his great speech from Mount Sinai. (Good speakers always begin with a joke.)

“Hey, how’s everybody tonight? Well, ‘shofar,’ so good (rim shot). So, how ‘bout that Passover meal? Great menu if you have to be on the lamb (rim shot). Oy, tough room. I’m dying like firstborn in Egypt (rim shot). Holy smoke, have I got some news for you. . . .”

Prof. Tikk also reveals that Abimelech was not killed by a millstone landing on his head, but with an Acme anvil.

The secret inscriptions also reveal that angels used humor to ease into their pronouncements. For instance, before the angels appeared to the shepherds, Gabriel opened with this, until now, undiscovered monologue.

“I just flew in from heaven, and are my arms tired. Hey, don’t be sheepish, flock right up here. Ewe’ll love the good news I have for you.”

In addition to the three wise men, Tikk argues there were three unwise men named Moeshak, Larryshak, and Shemp who brought gold, frankincense and mirth.

The Whoopee Cushion Code reveals its most controversial claim of all: the rapture is actually a hilarious practical joke. Tikk explains, “It’s ‘Candid Camera,’ ‘America’s Funniest Home Videos’ and ‘Punk’d’ all rolled into one.”

Note
Jesus was a stand-up comic. Really! The hip humor in first century Palestine was hyperbole or intentional exaggeration. So, when Jesus talked about people who “. . . strain out a gnat but swallow a camel” or look for a speck in someone’s eye, when they have a log in his or her eye, he had them rolling on the hillsides! And ridiculous situations are always good for a laugh: pulling a camel through the eye of a needle, hiding a lamp under a bed. And, at that time, a lamp was an open flame and a bed was a dried, grass mat. Whoosh!

Related sites
• Having the last laugh
• Laughing matters
• The power of humor in writing/speaking
• Writing with Banana Peels: Principles, Practices and Pratfalls