David Meade, a “Christian numerologist” has predicted the end of the world as we know it September 23. In his self-published book, Planet X — The 2017 Arrival, he predicts that a planet called Nibiru will crash into Earth in October. However, he’s since moved the date forward to September 23. (The idea of an unseen planet crashing into earth originated with a Wisconsin woman, Nancy Lieder, who believes “gray extraterrestrials called Zetas” implanted a communications device in her brain through which she was warned of the impending collision.)

Meanwhile, Robert Binnion and Donna Larson are less specific, but have posted on separate “end of time prophecy” websites that 2017 is the year of the End.

According to The Sun, Larson “points to the Bible’s claims that man will rule the earth for 6,000 years before facing God’s wrath. By her reckoning, Adam was created in 3,983 BC—helpfully marking the six thousandth anniversary [in 2017]. The date also coincides with the 70th anniversary of Israel’s birth and 50 years after the unification of Jerusalem.”

I have no obscure verse from Daniel or the Revelation to prove this, but I suspect that the enemy has used these false prophets since A.D. 365, to make a mockery of the very real return of Christ on a date “no one knows . . . not even the angels in heaven or the Son himself. Only the Father knows” (Matthew 24:36).

“Yeah, yeah, yeah. These false prophecies have been predicting specific dates and not one has come to pass. Nothing to worry about, people!”

Yep, pretentious “prophets” have predicted the end of the world on specific dates for nearly 2,000 years—and they’ve all been wrong!

365
Hilary of Poitiers announced the world would end in the year of 365. When it didn’t his student, Saint Martin of Tours, pushed the date out to 400. Other predictions followed of 500 (Hipplytus), 968 (German emperor Otto III) and Good Friday 992.

January 1, 1000 (Y1K)
Christians in Europe believed Christ would return on that date and gave their worldly goods to the church—which didn’t give them back, which probably led to the Reformation.

October 3, 1533
After “a careful study of the Bible and mathematics,” German mathematician Michael Stifel predicted a date for the end of the world. Stifel gathered his small group of true believers atop a hill near Lochau. When the end did not occur, he was placed in protective custody from angry villagers who had sold their homes and farms in anticipation of the end.

1688-1700
Scottish mathematician John Napier published The Plaine Discovery of the Whole Revelation of St. John. In it, he identified the Pope as the Antichrist and predicted the end of the world between 1688 and 1700.

1806
The announcement of Christ’s return was hatched in the English town of Leeds when a hen began laying eggs inscribed with the message “Christ is coming.” The hen’s owner had egg on his face when the hoax was eggs-posed.

March 21, 1843
More recently, William Miller predicted the world would end on October 22, 1844. Thousands of “Millerites” sold their property and possessions, quit their jobs and prepared themselves for the second coming. The failed prophecy was dubbed “The Great Disappointment.” Undeterred, Miller reset the date for October 22, 1844. Greater disappointment!

1844-1850
Ellen White, founder of the Seven Day Adventists movement, made many predictions of the timing of the end of the world during this time. All failed.

1910
In 1881, an astronomer predicted that the tail of Halley’s Comet contained a lethal gas known as cyanogen. And since earth would pass through the comet’s tail in 1910, The New York Times reported that Earth would be sprayed with the deadly gas.

1914
Using a complex formula based on the “days” of Daniel 4, the Jehovah’s Witnesses Watchtower Bible and Tract Society predicted Christ’s return in 1914. When the date passed, leaders claimed Christ had “invisibly” begun His rule.

December 17, 1919
Meteorologist Albert Porta predicted that the alignment of six planets would “generate a magnetic current that would cause the sun to explode and engulf the earth” on that date.

March 10, 1982
In 1974, astronomers John Gribben and Stephen Plagemann predicted the “Jupiter Effect” in which planets would align on the same side of the sun unleashing solar flares, radio interruptions, rainfall and temperature disturbances and massive earthquakes.

May 14, 1988
Hal Lindsey, in his best-selling book The Late, Great Planet Earth, predicted Rapture in 1988—one generation or 40 years after the creation of the state of Israel.

1994. May 21, 2012, October 21, 2012
Harold Camping, of Family Radio, urged listeners to abandon the church and prepare for Christ’s return in 1994. That, obviously didn’t happen, so he revised the date to May 21, 2011, which he claimed is exactly 7,000 years since Noah’s flood. When the multi-million-dollar ad campaign failed to deliver, Camping confidently announced that Christ had indeed returned “spiritually” and would return “physically” on October 21, 2012. Critics claim this was his twelfth false prediction. To his credit, ten months after the 2011 prediction proved false, Camp acknowledged that he had been mistaken, that his attempt to predict a date was “sinful,” and that his critics had been right in pointing to the scriptural text “of that day and hour knoweth no man.”

1997
The UFO cult, Heaven’s Gate, believed an alien spacecraft was trailing the comet Hale-Bopp—due to pass by earth in 1997—and so 39 followers attempted to join the spacecraft by committing mass suicide on March 26, 1997.

1999
French astrologist Nostradamus (1503-1566) alluded to Armageddon in his vague symbolic poetry when he wrote, “The year 1999, seventh month/From the sky will come great king of terror.”

January 1, 2000 (Y2K)
Alarmists claimed a dating glitch would cause computers around the world to crash causing widespread disaster.

December 21, 2012
Since the Mayan calendar ended on this date, many believed this meant the world would end as well. Of course, the ancient Mayans couldn’t even predict their own demise when Spanish conquistadores and their allies conquered them in the 1600s!

September 2015
John Hagee, TV preacher and author of the best-selling book, Four Blood Moons, believed “something dramatic [will] happen in the Middle East involving Israel that will change the course of history in the Middle East and impact the whole world” based on four recent lunar eclipses. Others were more extreme in interpreting the significance of four lunar eclipses producing a reddish glow (“blood moon”) occurring so close together. They believed the world will end in a massive meteor strike on the earth between September 22 to 28 of 2015.

Nope! Not one of those predictions came true! Here’s one that will:

If someone is predicting Christ’s return on a specific date, you can be sure they are wrong! 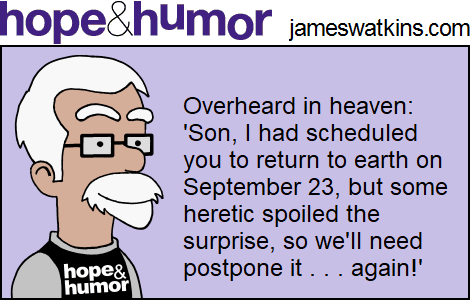 “However, no one knows the day or hour when these things will happen, not even the angels in heaven or the Son himself. Only the Father knows” (Matthew 24:36).

You also must be ready all the time, for the Son of Man will come when least expected” (Matthew 24:44).

All these so-called biblical “scholars” are boys crying wolf, so that the world scoffs—not only at their predictions—but the truth that Jesus himself has promised he will return to earth. So, here’s what we can know:

• pray for workers to reap a great harvest of followers prior to His coming (Matthew 9:38)

• be found alert and praying when He does return (Ephesians 6:18)

So when the apostles were with Jesus, they kept asking him, “Lord, has the time come for you to free Israel and restore our kingdom?”

He replied, “The Father alone has the authority to set those dates and times, and they are not for you to know” (Acts 1:6-7 Emphasis mine).

That’s pretty clear! And here’s a big but:

“But you will receive power when the Holy Spirit comes upon you. And you will be my witnesses, telling people about me everywhere—in Jerusalem, throughout Judea, in Samaria, and to the ends of the earth” (Acts 1:8).

What if we spent our time instead of trying to discern when Jesus will return, we spent it telling our family, friends and others—here and around the world—that they can know Jesus today?!

Related post
• Should Christians get caught up in “rapture”?