Feeling inadequate, unequipped, in the dark?

I love the story of Gideon: not the guy who keeps leaving his Bible in hotel rooms, but the Jewish judge who describes himself as “the least in my entire family.” God has called Gideon to liberate the Israelis from the cruel oppression of the Midianites. But to defeat the enemy of over 100,000 troops, God provides him with just 300 men. (Nope, I didn’t leave out any zeroes. That’s 100,000 v. 300!) And they’re probably the guys who get picked last in pick up games at Jerusalem Junior High.

God seems to delight when we feel totally inadequate. He tells Gideon, “You have too many warriors with you. If I let all of you fight the Midianites, the Israelites will boast to me that they saved themselves by their own strength” (Judges 6:2).

So, if you’re feeling overwhelmed by the number of challenges coming against you—physically, financially, spiritually, relationally, etc.—know that God is with you, and that makes you a majority!

Not only does Gideon’s 300 men face over 100,000 troops, but God orders them to fight with some very, shall we say, unconventional weapons: clay pots, torches and rams’ horns! Not only are they hopelessly outnumbered, but they’re facing swords and spears with these non-weapons.

Completely in the dark?

To make sure this military maneuver is humanly impossible, Gideon is told to launch his offensive in the middle of the night. No one, at that time, fought wars at night!

So, here’s the point: God seems to delight in using us at our worst, weakest and darkest moments. That way He gets the glory!

With trust and obedience, Gideon’s men surround the enemy camp with their torches hidden inside the clay pots in one hand and their rams’ horns in the other. At the signal, pots smash, the hills alight with flames and the horns sound. (Some believe that since troops usually had one trumpeter per one thousand men, the 100,000 believed they were surrounded by 300,000 troops.) The panicked Midianites begin swinging their swords in the dark and effectively killing each other.

Related posts
• Are you listening to Goliath or God?
• And from the H&H cartoons file: 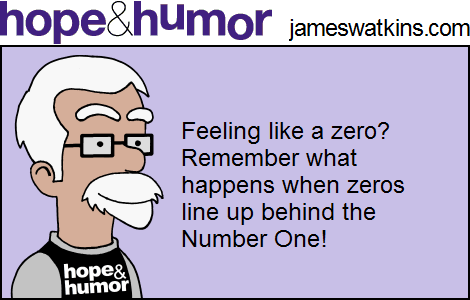