God is such a ‘drama king’ 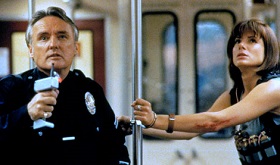 Does that sound like your life? That’s because God, the “author and finisher of our faith,” is the ultimate scriptwriter! [Continue reading]