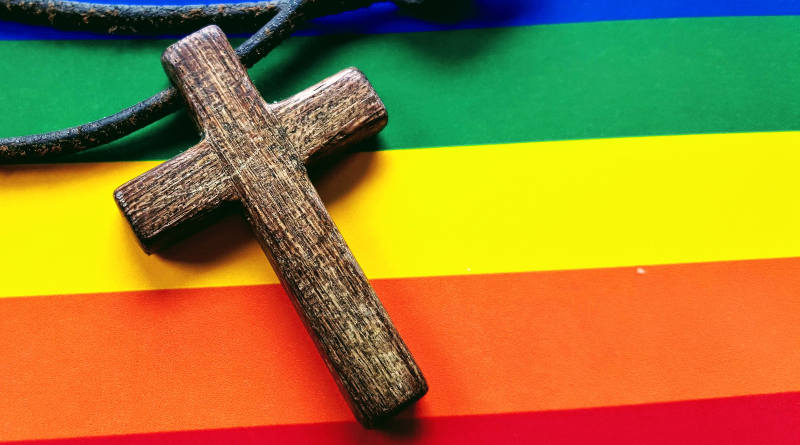 The late Fred Phelps was best known for his appearance at gay pride events with his signs “God Hates F–s.” Each time I saw him and his followers on the news brandishing picket signs and shouting hatred, my heart broke. He had apparently missed the Bible study that included 1 John 4:7-10:

Dear friends, let us continue to love one another, for love comes from God. Anyone who loves is a child of God and knows God. But anyone who does not love does not know God, for God is love.

God showed how much he loved us by sending his one and only Son into the world so that we might have eternal life through him. This is real love—not that we loved God, but that he loved us and sent his Son as a sacrifice to take away our sins.

I’ve been proclaiming our Creator’s message of love all through my writing and speaking career of over forty years. And since my first books for teens on sexuality came out in 1987 and 1991, I’ve been working on a “rough draft” dealing with homosexuality and the Christian faith. (My latest chapter on this is in The Why Files: When Can I Start Dating?, which came out in 2000.) It’s a very complicated issue. So, after 27 years of writing about the issue, this is still a rough draft in 2014. (This actual post is reaching nearly 20 revisions!)

So, here are some thoughts on the issue:

I believe that God loves every human being unconditionally.

For God so loved the world that he gave his one and only Son, that whoever believes in him shall not perish but have eternal life. For God did not send his Son into the world to condemn the world, but to save the world through him (John 3:16-17).

God’s love for humankind is symbolized by the marriage relationship between a man and woman.

“Haven’t you read the Scriptures?” Jesus replied. “They record that from the beginning ‘God made them male and female.’” And he said, “‘This explains why a man leaves his father and mother and is joined to his wife, and the two are united into one'” (Matthew 19:4-5).

As the Scriptures say, “A man leaves his father and mother and is joined to his wife, and the two are united into one. ” This is a great mystery, but it is an illustration of the way Christ and the church are one (Ephesians 5:31-32).

Because our relationship with God is to be symbolized by faithful relationships between a husband and wife, he provides rules to keep that relationship holy.

I believe God’s rules for sexual behavior apply universally to every human being . . .

. . . whether they are gay, straight, married, single, divorced, widowed or “It’s complicated.”

Here are just a few passages from Scripture in the New Living Translation:

Flee from sexual immorality. All other sins a person commits are outside the body, but whoever sins sexually, sins against their own body. Do you not know that your bodies are temples of the Holy Spirit, who is in you, whom you have received from God? You are not your own; you were bought at a price. Therefore honor God with your bodies” (1 Corinthians 6:18-20).

Because [humans rejected God, he] gave them over to shameful lusts. Even their women exchanged natural sexual relations for unnatural ones. In the same way the men also abandoned natural relations with women and were inflamed with lust for one another. Men committed shameful acts with other men, and received in themselves the due penalty for their error (Romans 1:26-27).

God’s will is for you to be holy, so stay away from all sexual sin. Then each of you will control his own body and live in holiness and honor—not in lustful passion like the pagans who do not know God and his ways. Never harm or cheat a Christian brother in this matter by violating his wife, for the Lord avenges all such sins, as we have solemnly warned you before. God has called us to live holy lives, not impure lives. (1 Thessalonians 4:3-6).

Some argue that Jesus never condemned homosexual unions, so why should we? It’s possible a) his teaching on the subject was simply not included in the gospels or b) more likely, he didn’t need to convince his listeners that God did not approve of homosexual behavior since his Jewish audience would be familiar with this well-known Old Testament passage:

If a man practices homosexuality, having sex with another man as with a woman, both men have committed a detestable act. They must both be put to death, for they are guilty of a capital offense (Leviticus 20:13).

I believe the good news of the gospel applies as much to homosexuals as it does to heterosexuals!

Sexual orientation is shaped by our role models, how we are treated—or mistreated—sexually in our formative years, and possibly even bio-chemical disruptions in our gestation. So, I believe that we will not be judged for our orientation but our behaviors. So, for many, making godly choices is going to be much more difficult. But, the apostle Paul writes:

No temptation has overtaken you except what is common to mankind. And God is faithful; he will not let you be tempted beyond what you can bear. But when you are tempted, he will also provide a way out so that you can endure it (1 Corinthians 10:13).

In three short verses, Paul provides both a warning and a promise:

Neither the sexually immoral . . . nor adulterers nor men who have sex with men . . . will inherit the kingdom of God. And that is what some of you were. But you were washed, you were sanctified, you were justified in the name of the Lord Jesus Christ and by the Spirit of our God (1 Corinthians 6:9-11).

The church in Corinth was filled with people who had acted immorally, but their behaviors had been changed through a relationship with Jesus Christ and the power of the Spirit.

In all honestly, I believe some believers will forever struggle with what nature and nurture have unfortunately dealt them. (There are things from my childhood that continue to challenge me.) But I believe in the power of Christ to completely change our attitudes and actions—if not sexual orientations or genetic predispositions. I believe God looks at our obedience rather than our orientation.

Eugene Peterson, in his paraphrase of Colossians 3, writes about holy actions.

So if you’re serious about living this new resurrection life with Christ, act like it.

So, chosen by God for this new life of love, dress in the wardrobe God picked out for you: compassion, kindness, humility, quiet strength, discipline.

So while controversy rages over the causes of homosexual orientation and if there is a “cure” for it . . .

5. I believe God can give homosexuals and heterosexuals the power to live holy lives.

And since this is still a rough draft, I’d love your comments! Thanks!

Related post:
This is one of the most biblical and compassionate comments I’ve read on the issue of being a Christian with same-sex attraction.

We’re born with a sin nature that bends us away from God (Romans 3:9–18), and we cannot please God without being reborn with a new nature (Romans 8:8; John 3:3). If we embrace our fallen condition and promote the effects of it (e.g., same-sex attraction), we’re idolizing ourselves. We’re saying that our sinfulness is more important than our obedience to God.

Sam Allberry, a pastor who has long suffered the impact of the Curse in his own same-sex attraction, realizes that Christ is greater than our struggles. The difference between him and [worship leader and gay advocate Vicky] Beeching is in his willful surrender:

“Yet this is not to say that it is not possible to be a Christian and experience homosexual feelings. We should expect a number of Christians to experience forms of same-sex attraction. We live in a fallen world. Creation has been subjected to frustration (Rom. 8:20), and so there is sickness and disorder. Christians succumb to the ravages of this fallen order as much as anyone. It is not unchristian to experience same-sex attraction any more than it is unchristian to get sick. What marks us out as Christian is not that we never experience such things, but how we respond to them when we do.”

In other words, we’re all sinners, but we must not elevate our desire to sin above our submission to God.

More related posts
• “Coming out” My sexual self-identity crisis
• It’s about obedience, not orientation
• LGBTQ and the B-I-B-L-E
• God hates hate
• Speaking with truth . . . and grace
• Why are some people so bent out of shape about homosexuality?