I promise not to tell you how to vote, but here are are variety of options to consider from a variety of voices. (You can skip right to the non-partisan conclusion if you wish.)

I love how the Pharisees sat around trying to think up impossible questions for Jesus. Hypothetical situations that would force Jesus to choose one of two damning answers. They thought they had the Son of God with this no-win question:

“Teacher,” they said, “we know how honest you are. You are impartial and don’t play favorites. You teach the way of God truthfully. Now tell us—is it right to pay taxes to Caesar or not? Should we pay them, or shouldn’t we?” (Mark 12:14-15).

Today, the Pharisees would ask, “Jesus, who are your voting for?!”

The 2016 presidential campaign has turned into the seemingly no-win questions of the religious leaders of Jesus’ time.

Early on, the Richmond Times-Dispatch’s editorial board opined that “Neither Donald Trump nor Hillary Clinton meets the fundamental moral and professional standards we have every right to expect of an American president.”

CNN’s Rudy Ruiz went further claiming, “Choosing between Clinton and Trump makes for the worst election ever. The only thing that promises to be ghastlier is the outcome.”

So, what are the options for conservative Christians? Is this, indeed, a no-win scenario?

Option one: Vote against Hillary Clinton

Reading Christian periodicals, websites and social media, it is clear that the overwhelming majority of conservative Christians are not voting for Hillary Clinton:

The Democratic nominee has pursued unaccountable power through secrecy—most evidently in the form of an email server designed to shield her communications while in public service, but also in lavishly compensated speeches, whose transcripts she refuses to release, to some of the most powerful representatives of the world system. She exemplifies the path to power preferred by the global technocratic elite—rooted in a rigorous control of one’s image and calculated disregard for norms that restrain less powerful actors. Such concentration of power, which is meant to shield the powerful from the vulnerability of accountability, actually creates far greater vulnerabilities, putting both the leader and the community in greater danger.

The Democratic candidate’s policy positions are so manifestly incompatible with Christian reverence for the lives of the most vulnerable, and . . . her party is so demonstrably hostile to expressions of traditional Christian faith. . . .

Wallace Henley, writing at ChristianPost.com, warned of 25 consequences of a Clinton presidency, three of which directly address conservative Christians’ concerns:

1. Hillary will continue and enlarge upon pro-abortion policies, including federal funding of Planned Parenthood.

2. Hillary will appoint a left-progressive federal judiciary, including Supreme Court justices for whom the Constitution is a loose and largely irrelevant document written by dead old white guys.

3. Hillary will support policies that will restrict religious freedom.

The American Association of Evangelicals released a statement warning, “When Hillary Clinton stated during a 2015 speech at the Women in the World Summit that religious beliefs ‘have to be changed,’ she was openly declaring war on Christian believers and the Church.”

The majority of conservative Christians are not voting for Donald Trump, but voting against Hillary Clinton. He, like his political opponent, has demonstrated throughout his life, he is morally unfit for the highest office in the land. The overwhelming feeling is that this is a contest is between “the lesser of two evils.”

[Conservatives] are left with a choice of voting for the one who will do the least damage to our freedoms. This is far from an ideal situation, but it is the reality in which we find ourselves and as difficult as it is, I refuse to find sanctuary on the sidelines and allow the country and culture to deteriorate even further by continuing the policies of the last eight years.

The vote-against-Clinton-by-voting-for-Trump is being embraced by evangelical leaders such as Jerry Falwell, Jr., James Dobson, and mega-pastor Robert Jefferies. Billy Graham’s son, Franklin, has claimed he is in not endorsing a candidate, but has urged Americans to “plug their nose and vote” for a candidate who supports their views on abortion, marriage, religious freedom and other issues.

Election year 2016 has been one surprise after another! And not just the usual “October surprises” such as email leaks and old video tapes. No, these are seismic surprises.

Dozens of Republican members of Congress have released a statement saying they cannot vote for Trump as he “makes a mockery” of their principles.

Given the enormous power of the office, every candidate for president must be judged rigorously in assessing whether he or she has the competence, intelligence, knowledge, understanding, empathy, judgment, and temperament necessary to keep America on a safe and steady course. Donald Trump fails on each of those measures, and he has proven himself manifestly unqualified to be president.

And what may be most surprising, since conservative Christians have traditionally voted Republican, leading evangelical voices are strongly denouncing the GOP candidate!

Russell Moore, president of the Ethics & Religious Liberty Commission of the Southern Baptist, has been an outspoken opponent from the beginning:

Moore calls evangelicals’ support of Trump, “a scandal to the gospel of Jesus Christ and to the integrity of our witness.” He tweeted, “The damage done to the gospel this year, by so-called evangelicals, will take longer to recover from than the ’80s TV evangelist scandals.”

For those who support Trump because he will nominate pro-life, pro-family judges, Eric Sapp provides this counter argument:

When George W. Bush was President, 2/3 of the Supreme Court were Republican appointees, and Republicans controlled the White House and all of Congress. Yet Roe remains. We cannot possibly be so naïve as to believe Donald Trump—who until he decided to run as a Republican supported partial birth abortion without restriction—would do more.

I sure hope it’s not because of “religious freedom” or the fear I’ve heard that if we get a liberal Court, Christianity will decline in America. I absolutely reject the fear that underlies the Supreme Court idolatry taking hold in some of our churches. If the Church needs the Court to save souls and empower a faithful witness—both spoken and lived—then we are truly lost. Christ promised us a cross and the Holy Spirit as our advocate, not tax breaks for our business and a worldly Court to defend our beliefs.

Trump’s religious literacy is surface-level when it is even existent. Despite laughable boasts like “nobody reads the Bible more than me,” he cannot cite a favorite Bible verse [and] he boasts that he never asks God for forgiveness. [Evangelicals’] alliance with Trump may be the triggering “deal with the devil” that scuttles their credibility and moral authority for a generation or more—and not just on matters of politics.

I honestly don’t know what makes me more sick. Listening to Trump brag about groping women or listening to my fellow evangelicals defend him.

Don’t get me wrong. I get how disastrous a Clinton presidency would be. [But] please stop defending and promoting Donald Trump!

Donald Trump may do less damage to the country than Hillary, but he’s done far worse damage to the evangelical church than anyone in recent history. And let’s remember, the church—not politics—is the only real hope of reforming the character of this nation and saving it from destruction. That’s why the witness of the church is simply not worth trading for a political victory.

[L]et’s refrain from embracing the person of Donald Trump or defending his misdeeds. Our integrity, and the reputation of the church, is simply too valuable to be sacrificed for a charlatan.

I’ve tried to keep my opinions and biases in check while writing this roundup of views. (I admittedly devoted more attention to the “vote against Clinton and Trump” simply because it has not gotten a lot of press.)

I will go on the record by stating that not voting is by the far the worst option!

Both Clinton and Trump have radical agendas for the United States that must be “checked and balanced” by the Congress. If you choose to not vote for the presidency, please vote for legislators who will block extreme proposals of whoever becomes president.

Vote for governors and local officials who will champion conservative Christian values. Not voting is not an option. 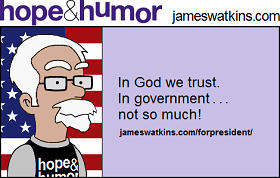 Option five: Trust God that his purpose will be fulfilled no matter who is elected

The Pharisees failed in every attempt to force Jesus into a lose-lose answer. I believe, that in the same way, God’s plans and purposes will be fulfilled in 2016.

I wrote an editorial for the Presidential Prayer Team that makes the case that God’s purposes have always been fulfilled in spite of immoral leaders such as Pharaoh, Cyrus, Nebuchadnezzar, Augustus Caesar, Herod, Pontius Pilate and all the rest down through history for blessings—and judgments—on his people!

However, this does not mean we disengage from the world. We must work and pray for just causes!

He has told you, O man, what is good; And what does the Lord require of you but to do justice, to love kindness, And to walk humbly with your God? (Micah 6:8 NASB).

Pray this way for kings and all who are in authority so that we can live peaceful and quiet lives marked by godliness and dignity (1 Timothy 2:2).

I think Lori Hollinger, a wise woman from my small group at church, put it best:

The Jews thought Jesus came to take over and conquer the Roman Empire. They thought he was a government leader—not the Savior of the world, the God Incarnate. They wanted a strong, government leader who would make their lives better, less oppressive, easier and safe.

As Americans, is this the same thing we do with our elected officials? We want Christians in power thinking that’s the way to get better lives that are less oppressive, easier and safe.

The government is not our savior. Jesus is. He didn’t come to merely be a governmental leader. I may get hate comments for saying this, but I’m not sure he cares about America’s upcoming election. Governments haven’t changed much: the leaders are still power hungry people, with little insight to the average person. They say crude, hateful things, and break laws and get away with it. Jesus is bigger than the American government. He is the Savior of the world, not just America. With this upcoming election, just remember who’s in power, who’s in control, who’s the King of Kings.

On the day after the election, I will be at peace and confident in the power of God almighty. And I will be praying for the new president!

If you found this helpful, please share it on your social networks. Thanks! And do vote November 8!