The Christmas story in chronological order 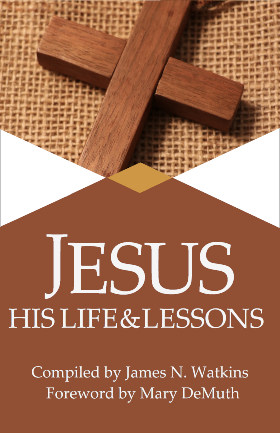 From Jesus: His Life and Lessons

Jesus is God from eternity

In the beginning was the Word, and the Word was with God, and the Word was God. The same was in the beginning with God. All things were made through him. Without him was not anything made that has been made. In him was life, and the life was the light of men. The light shines in the darkness, and the darkness hasn’t overcome it.
The Word became flesh, and lived among us. We saw his glory, such glory as of the one and only Son of the Father, full of grace and truth (John 1:1-5, 14).

Birth of Jesus foretold to Mary

Now in the sixth month, the angel Gabriel was sent from God to a city of Galilee, named Nazareth, to a virgin pledged to be married to a man whose name was Joseph, of David’s house. [See Jesus’ earthly family tree at the end of this section.]

The virgin’s name was Mary. Having come in, the angel said to her, “Rejoice, you highly favored one! The Lord is with you. Blessed are you among women!”

But when she saw him, she was greatly troubled at the saying, and considered what kind of salutation this might be. The angel said to her, “Don’t be afraid, Mary, for you have found favor with God. Behold, you will conceive in your womb, and give birth to a son, and will call his name ‘Jesus.’ He will be great, and will be called the Son of the Most High. The Lord God will give him the throne of his father, David, and he will reign over the house of Jacob forever. There will be no end to his Kingdom.”

Mary said to the angel, “How can this be, seeing I am a virgin?”

The angel answered her, “The Holy Spirit will come on you, and the power of the Most High will overshadow you. Therefore also the holy one who is born from you will be called the Son of God. Behold, Elizabeth, your relative, also has conceived a son in her old age; and this is the sixth month with her who was called barren. For nothing spoken by God is impossible.”

Mary said, “Behold, the servant of the Lord; let it be done to me according to your word.”

The angel departed from her. Mary arose in those days and went into the hill country with haste, into a city of Judah, and entered into the house of Zacharias and greeted Elizabeth. When Elizabeth heard Mary’s greeting, the baby leaped in her womb, and Elizabeth was filled with the Holy Spirit. She called out with a loud voice, and said, “Blessed are you among women, and blessed is the fruit of your womb! Why am I so favored, that the mother of my Lord should come to me? For behold, when the voice of your greeting came into my ears, the baby leaped in my womb for joy! Blessed is she who believed, for there will be a fulfillment of the things which have been spoken to her from the Lord!”

My soul magnifies the Lord.
My spirit has rejoiced in God my Savior,
for he has looked at the humble state of his servant.
For behold, from now on, all generations will call me blessed.
For he who is mighty has done great things for me.
Holy is his name.
His mercy is for generations of generations on those who fear him.
He has shown strength with his arm.
He has scattered the proud in the imagination of their hearts.
He has put down princes from their thrones.
And has exalted the lowly.
He has filled the hungry with good things.
He has sent the rich away empty.
He has given help to Israel, his servant, that he might remember mercy,
As he spoke to our fathers,
to Abraham and his offspring forever.

Mary stayed with her about three months, and then returned to her house (Luke 2:26-56).

Birth of Jesus foretold to Joseph

Joseph, her husband, being a righteous man, and not willing to make [Mary] a public example, intended to put her away secretly. But when he thought about these things, behold, an angel of the Lord appeared to him in a dream, saying, “Joseph, son of David, don’t be afraid to take to yourself Mary, your wife, for that which is conceived in her is of the Holy Spirit. She shall give birth to a son. You shall call his name Jesus, for it is he who shall save his people from their sins.”

Now all this has happened, that it might be fulfilled which was spoken by the Lord through the prophet, saying,

Behold, the virgin shall be with child,
and shall give birth to a son.
They shall call his name “Immanuel;”
which is, being interpreted, “God with us.”

Joseph arose from his sleep, and did as the angel of the Lord commanded him, and took his wife to himself; and didn’t know her sexually until she had given birth to her firstborn son (Matthew 1:19-25).

Now in those days, a decree went out from Caesar Augustus that all the world should be enrolled. This was the first enrollment made when Quirinius was governor of Syria. All went to enroll themselves, everyone to his own city. Joseph also went up from Galilee, out of the city of Nazareth, into Judea, to David’s city, which is called Bethlehem, because he was of the house and family of David; to enroll himself with Mary, who was pledged to be married to him as wife, being pregnant.

While they were there, the day had come for her to give birth. She gave birth to her firstborn son. She wrapped him in bands of cloth, and laid him in a feeding trough, because there was no room for them in the inn (Luke 2:1-7).

There were shepherds in the same country staying in the field, and keeping watch by night over their flock. Behold, an angel of the Lord stood by them, and the glory of the Lord shone around them, and they were terrified. The angel said to them, “Don’t be afraid, for behold, I bring you good news of great joy which will be to all the people. For there is born to you today, in David’s city, a Savior, who is Christ the Lord. This is the sign to you: you will find a baby wrapped in strips of cloth, lying in a feeding trough.” Suddenly, there was with the angel a multitude of the heavenly army praising God, and saying,

When the angels went away from them into the sky, the shepherds said to one another, “Let’s go to Bethlehem, now, and see this thing that has happened, which the Lord has made known to us.” They came with haste, and found both Mary and Joseph, and the baby was lying in the feeding trough. When they saw it, they publicized widely the saying which was spoken to them about this child. All who heard it wondered at the things which were spoken to them by the shepherds. But Mary kept all these sayings, pondering them in her heart. The shepherds returned, glorifying and praising God for all the things that they had heard and seen, just as it was told them (Luke 2:15-20).

When eight days were fulfilled for the circumcision of the child, his name was called Jesus, which was given by the angel before he was conceived in the womb (Luke 2:21).

Behold, there was a man in Jerusalem whose name was Simeon. This man was righteous and devout, looking for the consolation of Israel, and the Holy Spirit was on him. It had been revealed to him by the Holy Spirit that he should not see death before he had seen the Lord’s Christ. He came in the Spirit into the temple. When the parents brought in the child, Jesus, that they might do concerning him according to the custom of the law, then he received him into his arms, and blessed God, and said,

Now you are releasing your servant, Master,
according to your word, in peace;
for my eyes have seen your salvation,
which you have prepared before the face of all peoples;
a light for revelation to the nations,
and the glory of your people Israel.

Joseph and his mother were marveling at the things which were spoken concerning him, and Simeon blessed them, and said to Mary, his mother, “Behold, this child is set for the falling and the rising of many in Israel, and for a sign which is spoken against. Yes, a sword will pierce through your own soul, that the thoughts of many hearts may be revealed.”

There was one Anna, a prophetess, the daughter of Phanuel, of the tribe of Asher (she was of a great age, having lived with a husband seven years from her virginity, and she had been a widow for about eighty-four years), who didn’t depart from the temple, worshiping with fastings and petitions night and day. Coming up at that very hour, she gave thanks to the Lord, and spoke of him to all those who were looking for redemption in Jerusalem (Luke 2:25-38).

Now when Jesus was born in Bethlehem of Judea in the days of King Herod, behold, wise men from the east came to Jerusalem, saying, “Where is he who is born King of the Jews? For we saw his star in the east, and have come to worship him.” When King Herod heard it, he was troubled, and all Jerusalem with him. Gathering together all the chief priests and scribes of the people, he asked them where the Christ would be born. They said to him, “In Bethlehem of Judea, for this is written through the prophet,

“You Bethlehem, land of Judah,
are in no way least among the princes of Judah:
for out of you shall come a governor,
who shall shepherd my people, Israel.”

Then Herod secretly called the wise men, and learned from them exactly what time the star appeared. He sent them to Bethlehem, and said, “Go and search diligently for the young child. When you have found him, bring me word, so that I also may come and worship him.”

They, having heard the king, went their way; and behold, the star, which they saw in the east, went before them, until it came and stood over where the young child was. When they saw the star, they rejoiced with exceedingly great joy. They came into the house and saw the young child with Mary, his mother, and they fell down and worshiped him. Opening their treasures, they offered to him gifts: gold, frankincense, and myrrh. Being warned in a dream that they shouldn’t return to Herod, they went back to their own country another way (Matthew 2:1-12).

Excerpted from Jesus: His Life and Lessons

This user-friendly book arranges His life in chronological order and His teachings by topics, plus a glossary to make it even easier to explore the gospels. No commentary, no doctrinal states, just 100% Jesus. A perfect gift for anyone seeking to learn more about Jesus. Buy one for yourself and another for a friend.

Browse
• Introduction
• Life: The story of his death and resurrection
• Lessons: On love
• About the translation, World English Bible