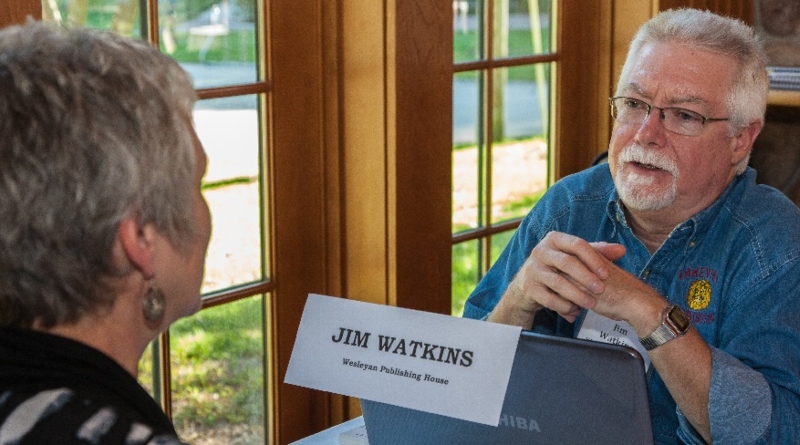 I had the privilege to be interviewed on Janice Broyle’s very helpful writers site: Monday Meet Ups.

1. Please tell us a little about yourself and how you became an editor?

I loved journalism while in high school, writing columns each issue while a sophomore and junior, and then becoming editor my senior year. In college, I was youth leader at my church. I produced four issues of an “underground” newspaper (this was, after all, the late sixties, early seventies) which we handed out on the streets. My denomination took notice and hired me as a college sophomore to edit their teen magazine. That was twenty books and over two thousand published articles ago. Time does fly when you’re having fun.

2. You have the unique position of being an acquiring editor and being a writer too. Tell us about your writing projects.

Thanks for asking. The Imitation of Christ: Classic Devotions in Today’s Language releases January 12. It’s a modernization of Thomas à Kempis’ 1420 work arranged and formatted as devotionals. This is a huge shift in my writing. The twenty previous book’s “brand” have been “hope and humor” with lots of comical commentary on sex and love, Christian living and writing.

I’ve always been a half-breed. My very first book came out while I was editor of teen curriculum at Wesleyan Publishing House. Subsequent books developed from articles I wrote during my six years there.

I think being a writer, makes me a more compassionate editor. I know how much rejection slips hurt! It also helps me to train writers at the ten to twelve conferences each year where I speak.

3. What do you wish aspiring authors knew about the book industry?

It is an “industry.” Just as a business needs to make a profit to survive, publishers need to consider the bottom line to stay in business. It’s a terrific time to be a writer with blogs, Facebook, Twitter and independent publishing of eBooks and print-on-demand volumes. (The number of self-published books has actually over taken traditionally published books!)

But it’s a terrible time to be a publisher with rising paper, production and distribution costs. There are now fewer houses producing fewer titles by fewer authors. Seventy-percent of books lose money, so publishers are depending on that 30 percent to be successful sellers to keep them in business for another year.

Because of this, there has been a dramatic raising of the publishing bar. Publishers printed “good” writing thirty years ago, but are now publishing only “great” writing. I think the increase in number of writers’ conferences and other training opportunities in person and in print, have increased the quality and quantity of writers in the market. As a result, only 1-3 percent of writers are being published by commercial publishers.

Writing now has to be exceptional for a book publisher to risk several thousand dollars to publish. (Magazine markets can take risks because they are not risking an entire issue’s success on just one article. And most magazines circulations dwarf the average book’s 500-copy sales. So, if you want respect, write a book. If you want readers, write an article!)

It is a business, so writers need to be business-like in their writing and promotion of work—even in their social networking.

4. What makes a nonfiction book proposal really stand out from the others in the pile?

Some very basic things can put a writer in that rare 1-3 percent of published authors:

Spell my name correctly, and never, ever refer to me as “to whom it may concern.” If you haven’t thoroughly studied the publisher, you will immediately end up in the rejected 97 percent of writers. I receive so many proposals from people who have no idea that a) Wesleyan Publishing House is a Christian publisher, b) we’re limited to discipleship books, and c) don’t publish fiction, memoir or children’s books. Get a copy of The Christian Writers Market Guide and then go online for the latest editor’s name and current guidelines. (Publishing is constantly changing!)

But even more important in today’s publishing world, “platform” is essential. Publishers need the writers’ help in promoting the book. Our executive editor explains platform as a) being well-known in the church, being a leader in nationally-known parachurch organization or well-known on national stage for accomplishments or newsworthy contribution, b) having moderate success in previous Christian books, c) a busy speaking schedule to district, state and national/international venues, and d) a well-trafficked blog/website and thousands of Facebook and Twitter followers.

Having to reject proposals from great writers with a great topic, simply because they don’t have platforms, breaks my writers’ heart. Fortunately, editors don’t have hearts. (Just kidding!) As an editor, I know that without a platform the chances for success are next to nothing. Sarah Young, who was an unknown missionary in Australia, was a rare exception with Jesus Calling. It’s been a number-one best-seller every year since it launched in 2004, but that happens one in a million times, maybe ten million times.

5. Is having an agent important? Why?

Yes, it’s important but not essential in getting your book to the publications board. Many publishers, to save money, have gone to an “agented-only” policy. (This makes agents the “first reader,” who send publishers only good, appropriate proposals.) But writers can make an end-run around that barrier by meeting editors face to face at conferences.

However, I firmly believe an agent is essential in the contracting process. Like a casino, the odds are always in the house’s favor. My first book—without an agent—I got 10 percent royalty on net, no advance and ten comp copies. With an agent, I’ve been able to almost double the royalty, receive a generous advance that paid a year’s living expenses, and nearly 100 comp books. Yep, my agent has earned her 15 percent!)

6. Anything you’d love to see from your slush pile? A particular genre? Something specific?

Nonfiction, around 40,000 words, focusing on spiritual growth for yourself or others with great, creative writing. And, of course, a good platform. Dark chocolate doesn’t hurt either!

Get involved with a writing group with published, informed writers in the mix. Having your work competently critiqued—not your mother, best friend or spouse—is so important.

Go to writers’ conferences and meet with as many agents and editors as possible. My latest book is the only book for which I have not first met the editor. All the others, I apparently convinced them of my passion and knowledge for the book. And, I must have appeared articulate enough to do well with radio and television interviews.

“Use” your friends and colleagues. According to the networking gurus only “six degrees” separate you from anyone on the planet. You know someone who knows someone who knows. . . . Who do you know who can introduce you to someone at the next level? I was fortunate while writing my early teen books to have had the president of Youth for Christ earlier as my Campus Life director. I know one of the White House advisors on faith, several New York Times best-sellers, two movie actors, a chart-topping singer, and lots and lots of editors. (So, guess who has endorsed my books? Opened doors for speaking?) Allow God to take your writing and speaking from “Jerusalem to Judea to Samaria to the ends of the earth.” I’ve gone from small local church audiences to international conventions—only because I knew people who knew people who knew people.