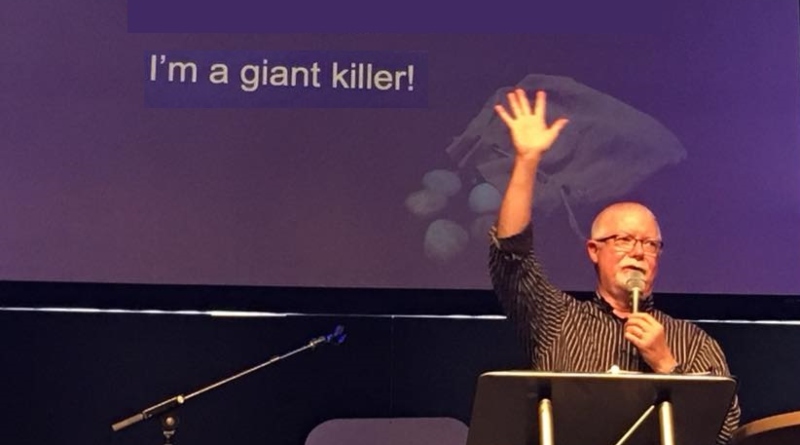 From my keynote talk to writers, but the principles are applicable to anyone facing a “giant.” (Listen to Complete keynote.)

And there went out great editors from the camp of the Publishers, who stood tall in the eyes of the writers. And the editors bore upon themselves weighty and impressive titles and they were armed with powerful contracts and, yea even, rejection slips. And their pens were like weaver’s beams weighing heavy upon the writer’s manuscripts.

And the editors came forth as one and called out from the panel to the writers, “Come forth and send us your manuscripts. For are we not editors and you not writers? Send forth thine manuscript, and if they shall overcome our editorial committees, we shall serve thee with a contract. But, if they shall not, then thou shalt receive thine SASE in return.”

And when the writers and those gathered with them heard these words of the Publishers, verily they were dismayed and greatly afraid.

Now David, a young writer from Bethlehem, Pennsylvania, who had the anointing of the Lord upon his head, heard these sayings, and spake to those about him saying, “What are thou submitting to the Publishers that encamp about us? For behold, I have brought forth a proposal that the Lord hath given me.”

And the people answered after this manner saying, “These editors are great and powerful, and we are but struggling writers. The battle is too great for us.”

And David’s older brother, Elieab, heard what he spoke unto those at his table; and Elieab’s anger was kindled against David, and he sayeth, “Why comest thou down hither? And with whom hast thou left thine minimum-wage job at Mutton Burger? I know thy pride, and the haughtiness of thine heart; for thou art come down that thou mightest see the Publishers.”

And David saith to those at his table, “Thy servant shall present an editor with a proposal, a table of contents, chapter summaries, and three sample chapters.”

And those at the table saith as one to him, “Thou art not able to go up to the Publishers. For thou art but a youth, and they have been editing from their youth.”

And David saith unto them, “Thy servant has been faithful in attending writers’ conferences, in subscribing to the Writer’s Digest Book Club, and in journeying unto night classes. And I went forth and did sell short stories and devotionals unto take-home papers and denominational magazines for three cents a word. Behold, I have a portfolio of published work, with which I shall got out to the Publishers.

David moreover said, “The Lord hath caused thine servant to be published in smaller markets, He will deliver my manuscripts into the hands of these great Publishers. And they said unto David, “Go and the Lord be with thee.” But gazing upon his proposal, those sitting at meat at the table, saith unto him, thou canst go unto the Publishers. Thou must write this again, in our image and in our style. For behold, no Publisher doth bring forth what thou hath written.

And they re-wrote David’s proposal and sample chapters in their own image, in the style of their own making. But David saith unto them, “I canst go with these revisions, for I have not proved them.” And David went forth with his original manuscript.

And behold, in the current edition of The Christian Writers’ Market Guide it was written that there was a certain editor which did procure and did purchase and did publish manuscripts of such that David hath written. And he took his proposal in his hand, and chose him five well-polished stories from his file, and put them in his portfolio; and he drew near to the Publishers.

And it came to pass, when the editor arose, and came and drew nigh to meet David, that David hasted, and ran toward the Publisher to meet the editor. And David put his hand in his portfolio, and took thence the proposal, and struck the editor with a single pitch, so that yea, it sank deep into his mind.

So David’s proposal prevailed in the house of the Publisher. Therefore, David taketh his pen and signeth the contract. And the people of Israel and of Judah did arise and did go forth and did buy the words that David did write.