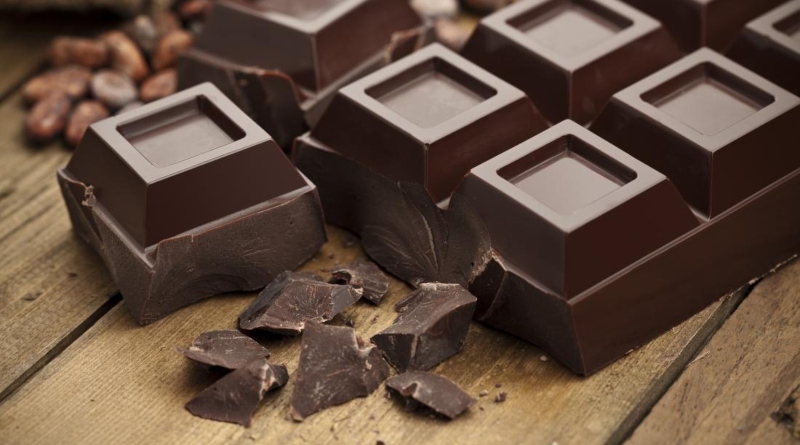 And that’s a good thing. Dark chocolate is actually good for you! Numerous medical studies have revealed significant health benefits, but these apply to only dark chocolate. (White “chocolate” is a complete misnomer!)

The history of chocolate dates back to 1900 BC in Mesoamerica when the Aztecs believed cacao seeds were the gift of Quetzalcoatl, the god of wisdom. It was originally served as a drink which was believed to give the drinker strength and aphrodisiac powers.

Hernán Cortés (1485-1547), the Spanish explorer and conquistador who conquered the Mexican Aztecs, praised chocolate in a letter to King Carlos I of Spain: It “builds up resistance and fights fatigue.” Cortés claimed Montezuma II, the ninth Aztec emperor, drank 50 cups of cocoa a day!

Later, Baron Justus von Liebig, a German chemist, declared, “Chocolate is a perfect food, as wholesome as it is delicious, a beneficent restorer of exhausted power. It is the best friend of those engaged in literary pursuits.”

Warning! This page is for entertainment purposes only, and is not intended, implied, or to be construed as medical advice. Consult your doctor before embarking on a diet program of dark chocolate. Eat balanced meals, exercise, and if you weigh more than your refrigerator, seek immediate medical care.

Yep, the food of the gods is now linked to “a host of cognitive benefits, including memory and abstract reasoning.” That’s the conclusion of a long-term, large-scale study from Syracuse University in New York. It measured the effects of chocolate consumption on 968 people aged 23 to 98, without changing their overall dietary habits.

The study claims, and I quote,”Habitual chocolate intake was related to cognitive performance, measured with an extensive battery of neuropsychological tests. More frequent chocolate consumption was significantly associated with better performance on [these tests].”

But wait, there’s more! The study’s leader, Dr. Daniela Jakubowicz, reports that eating a higher-calorie breakfast in the morning reduces cravings throughout the day and prevents late-night snacking. (She’s coincidentally the author of The Big Breakfast Diet.)

“When you wake up, your brain needs energy immediately. This is the time of the day when your body converts food into energy. Later in the day, when you eat, your body and brain are still in high-alert mode, saving the energy from food as fat reserve. This is how you gain weight even eating less.”

Dark chocolate, berries and even red wine contain flavanoids, and now it has emerged that eating high levels of the compounds can provide protection from type 2 diabetes by helping the body regulate sugar levels.

Professor Aedin Cassidy led the research at the University of East Anglia in Norwich. The study involved 2,000 women keeping a diary of all the food and drink they consumed and blood samples being analyzed.

It revealed flavanoids help regulate levels of insulin, the hormone which controls glucose in the body. They also seemed to help prevent chronic inflammation.

Yep, a study, published in the journal Neurology (my favorite magazine), has shown that drinking two cups of hot chocolate a day was linked to—and I quote—”improved blood flow to the brain and better scores on memory and thinking skill tests for elderly people with impaired blood flow.”

Harvard researcher, Dr. Can Ozan Tan, notes, “There has been considerable interest in the development of polyphenols including flavanols as vascular interventions for neurodegenerative disease either as single chemical entities (such as epicatechin and resveratrol) or as components of nutriceuticals such as cocoa, but the results of this pilot trial argue against this hypothesis.”

Great news for us chocoholics! At the European Society of Cardiology, Greek researchers announced that dark chocolate actually “improves the function of blood vessels.”

Yep, the study of 17 volunteers who ate 100 grams (3.5 ounces) of dark chocolate exhibited “improved function of the endothelial cells in the arteries for about three hours” after eating the semi-sweet treat. In lay terms, “helps prevent dangerous blood clots and reduce heart disease.”

A Dutch study also reports the health benefits of chocolate. Published in the respected medical journal, The Lancet, it states chocolate “may play an important role in protecting against heart disease, cancer, and other health conditions.”

Chocolate also contains theobromine, caffeine, phenylethylamine and anandamide–chemicals that are known to affect the brain. Theobromine and caffeine are known to be stimulants. Phenylethylamine combines with dopamine in the brain to produce a mild antidepressant effect. And anandamide also affects brain chemistry to produce feelings of calm and well-being. (Two other studies confirm the health benefits of dark chocolate.)

Yep, I always feel much better after an Extreme Chocolate Blizzard at DQ.

However, the study warns “Unfortunately, to actually get that comparable level of antioxidants from chocolate, you’d have to eat about two pounds of it, compared to about a quart of tea. Overeating chocolate can lead to other health problems including obesity.”

Ah, but more studies show that the dangers of obesity are great overblown. The New England Journal of Medicine editorialized in 1998, “Although some claim that every year 300,000 deaths in the United States are caused by obesity, that figure is by no means well established. Not only is it derived from weak or incomplete data, but it is also called into question by the methodologic difficulties of determining which of many factors contribute to premature death.”

It continues, “Calculations of attributable risk are fraught with problems ? [and can produce] a nonsensical result.”

What is documented is that Fat people are happier, better lovers, and less likely to appear on “America’s Most Wanted.”

Yep, that’s the claim of James Watson, the genetic genius who discovered the structure of DNA. (Keep in mind, this is not some “expert” from Swampgas Community College writing in the National Enquirer. Watson is a revered, respected researcher with a Nobel Prize hanging on his office wall!) The good doctor revealed his heavy-weight theory at the University College London.

His study of chemicals in the body has led him to conclude that extra fat has the effect of boosting endorphins – the natural mood-enhancing chemical – and a hormone linked to sexual desire. Fat tissue produces leptin which increases levels of MSH, which in turn increases levels of romance.

“The heavier you are, the more leptin and possibly the more MSH,” claims Watson. “My guess is that your mood is controlled by endorphins and you make more of these when you are fat. Hence nobody has ever drawn Santa Claus thin–thin people are discontented.”

According to the study, in the past people would have spent their lives constantly looking for food. The reward for the hard work would be eating and gaining weight. “Thin equals discontent. Content people have weight on them. That is why we hire thin people because they are discontent and will work harder. Heavier people are more mellow and less successful.”

“Thinness is never associated with sexuality,” said the 72-year-old Watson. “Posh Spice and Calista Flockhart might smile for the photographers, but beneath their sleek exteriors lurk miserable thin souls.” Watson points out that Diet Coke drinking, chain-smoking supermodels are “particularly sad. Who has ever heard of a happy supermodel? Why is the association with these people and drugs so strong? It may not be a moral weakness but in fact a thin person trying to find happiness in artificial opiates.”

He also credits the drop in U.S. crime rates to the rise in obesity in the land of donuts, Ding Dongs, and Doritos. Contented, mellow people don’t rob convenience stores.

Dr. Watson has convinced me that a few extra pounds might actually be emotionally healthy, and the Dutch and Greek studies prove what I’ve always believed, that dark chocolate should be recognized as a basic food group.

Until all these health and diet experts can agree on high protein, low carbs; no meat, high carbs; or fat-free, high fiber diets, I’m going to kick back with a Hershey’s dark chocolate bar. I can just feel the anti-oxidants and endorphin levels rising.

Great news for chocoholics! Our favorite food can, and I quote, “significantly reduce LDL or ‘bad’ cholesterol levels and promote healthy circulation to maintain heart health.”

I’ve died and gone to heaven!

“Created after more than a decade of research, CocoaVia? is the only product that contains a patented blend of heart-healthy cocoa flavanols and cholesterol-lowering plant sterols from soy. The new line of snacks also is fortified with calcium and a mix of heart-healthy nutrients including folic acid, vitamins B-6, B-12, C and E.”

Dr. Harold Schmitz, chief science officer at Mars, reports, “It’s a first-of-its-kind product that was purposely designed to deliver heart-health benefits and real chocolate pleasure in products that are less than 150 calories per serving.”

Mars collaborated with researchers at Harvard and the University of California-Davis to explore, and again I quote, “the health benefits of cocoa flavanols–the powerhouse compounds found naturally in cocoa beans that are similar to those found in red wine and green tea. Scientists have been encouraged by the growing number of independent studies that indicate cocoa flavanols may help influence factors associated with clotting and promote a healthy blood flow. Other studies suggest that cocoa flavanols can improve the health of blood vessels and reduce the oxidation of LDL cholesterol that can lead to clogged arteries.?

CocoaVia? will be in the health food section of stores in October.

But wait, there’s more! Last year at the European Society of Cardiology, Greek researchers announced that dark chocolate actually “improves the function of blood vessels.” The study of 17 volunteers who ate 100 grams (3.5 ounces) of dark chocolate exhibited “improved function of the endothelial cells in the arteries for about three hours” after eating the semi-sweet treat. In other words, it “helps prevent dangerous blood clots and reduce heart disease.”

A separate Dutch study also reported the health benefits of chocolate. Published in the respected medical journal, The Lancet, it states chocolate “may play an important role in protecting against heart disease, cancer, and other health conditions.”

Chocolate has now been proven to a) reduce bad cholesterol, b) improve the function of blood vessels, c) help prevent blood clots, d) reduce the risk of cancer, e) treat depression, and f) produce feelings of calm and well-being!

Yep, I have died and gone to heaven! (Heaven’s streets may be gold, but if you peel back the foil, they’re actually dark chocolate.)

One of my “alert readers” sent this article from news.com.au:

According to Italian researchers, women who eat chocolate regularly had the highest levels of desire, arousal and satisfaction from sex.

Urologists from Milan’s San Raffaele hospital questioned 163 women about their consumption of chocolate and their sexual fulfilment.

“Women who have a daily intake of chocolate showed higher levels of desire than women who did not have this habit,” the study found. “Chocolate can have a positive physiological impact on a woman’s sexuality.”

Dr. Andrea Salonia, author of the study – funded by a university, not by the confectionery industry – said women who had a low libido could become more amorous after eating chocolate.

She believes chocolate could be particularly medicinal for women who shun sex because they are suffering from premenstrual tension.

That’s why there’s no twelve-step program for chocoholics. Dark chocolate is good for you!