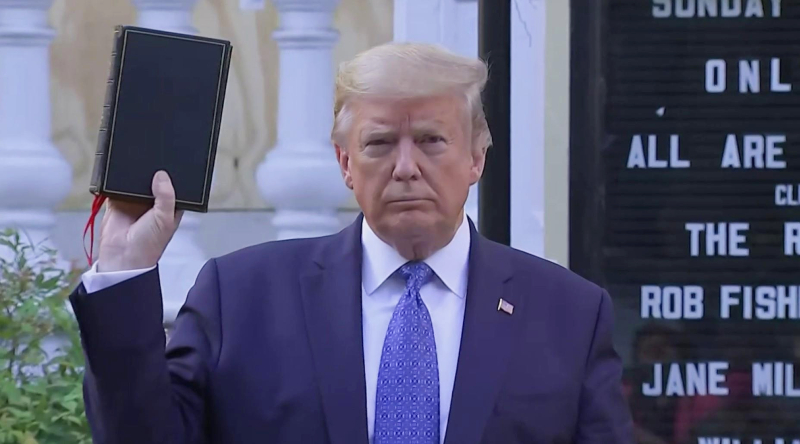 In an official video released by the Donald Trump campaign, the Republican candidate declares, “I really appreciate the support given to me by the evangelicals. They’ve been incredible. Every poll says how well I’m doing with them.”

Trump then holds up a worn Bible, which he says his mother gave him “many years ago.”

“In fact, it’s her writing right here. She wrote the name and my address and it’s just very special to me.”

In an interview with TheHill.com, he claimed, “Nobody reads the Bible more than me.”

However, Trump has come under fire by his opponents who claim he is using the Bible only as a prop to attract evangelicals. He claims it’s his favorite book, but refuses to quote a single verse. During the CBN interview, he did attempt to quote a verse from Proverbs: “Don’t tend toward envy.” But it’s not in Proverbs—nor any other biblical book. And in chapel at conservative Christian Liberty University, he referred to “Two Corinthians,” although virtually all Bible readers know it’s pronounced “Second Corinthians.”

I’m not making any judgments on his love or knowledge of the Bible. But here are ten verses he may want to consider:

10. Ephesians 5:3-4 Let there be no sexual immorality, impurity, or greed among you. Such sins have no place among God’s people. Obscene stories, foolish talk, and coarse jokes—these are not for you.

9. Colossians 4:6 Let your conversation be gracious and attractive so that you will have the right response for everyone.

8. Titus 3:2 [Leaders] must not slander anyone and must avoid quarreling. Instead, they should be gentle and show true humility to everyone.

7. James 3:13 If you are wise and understand God’s ways, prove it by living an honorable life, doing good works with the humility that comes from wisdom.

5. Matthew 22:37-40 Jesus replied, ‘‘‘You must love the Lord your God with all your heart, all your soul, and all your mind.’ This is the first and greatest commandment. A second is equally important: ‘Love your neighbor as yourself.’ The entire law and all the demands of the prophets are based on these two commandments.”

2. Matthew 6:24 24 “No one can serve two masters. For you will hate one and love the other; you will be devoted to one and despise the other. You cannot serve God and be enslaved to money.”

1. Acts 26:20 [A]ll must repent of their sins and turn to God—and prove they have changed by the good things they do.*

If you are one of many evangelicals supporting Donald Trump, I’m not judging you, either. I am simply urging you to honestly ask, Is Donald Trump supporting biblical teachings?

Please “be as shrewd as snakes and harmless as doves” (Matthew 10:16) as you select the next president of the United States.

“That’s not a particularly nice thing. But you know, if you look at what’s happening to our country, I mean, when you see what’s going on with our country, how people are taking advantage of us, and how they scoff at us and laugh at us.”

“You have heard the law that says the punishment must match the injury: ‘An eye for an eye, and a tooth for a tooth.’ But I say, do not resist an evil person! If someone slaps you on the right cheek, offer the other cheek also.”

Related posts
• Don’t judge but do deliberate
• Watkins for President 2016 The Tupperware Party: Putting a Lid on Government
• What does the Bible really say?
• WWJE? Who Would Jesus Elect?

* Trump told CNN’s Anderson Cooper, “”Why do I have to repent or ask for forgiveness, if I am not making mistakes? I work hard, I’m an honorable person.” Cooper followed up by asking, if “asking for forgiveness” is a central tenet in his faith life. Trump replied, “I try not make mistakes where I have to ask forgiveness.” (That seems to go against “The Lord’s Prayer” which instructs Jesus followers to regularly ask for forgiveness.)