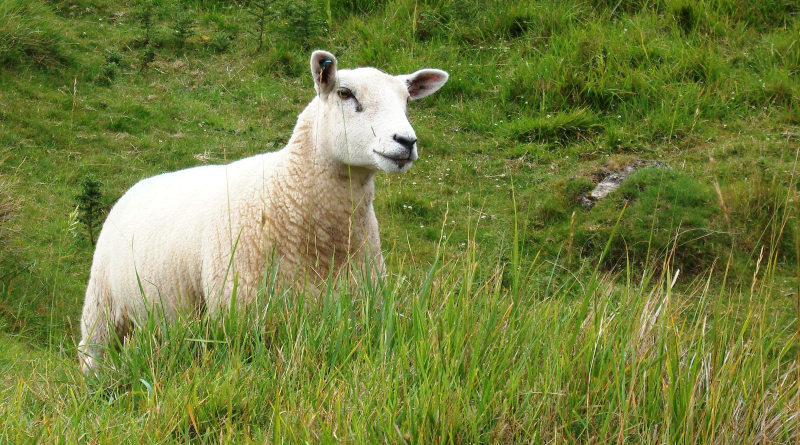 Shalom. I’m one of the elite sheep of Judea. Not just any sheep can belong to this sheepfold. We’re selected as young lambs as perfect sheep, without any blemishes, wounds or defects. And there’s more about sheep than any other animal in the Scriptures.

So, you’d think it would be a great honor to be on this hillside just south east of Jerusalem—the city of that great shepherd/king David. But there’s a rumor about what happens to us, the elite sheep. Talk around the sheepfold, here, is that we’re the sacrificial sheep for the temple.

We can see the temple from this hill. Herod, a Roman, had it rebuilt—only bigger and more beautiful—to keep the Jews, who resented Roman occupation, pacified. It was strictly a political payoff, but at least the Jews had their temple re-built. It took ten years to build this twenty-six-acre temple made white marble and gold plated on the eastern side.

But rumor has it that on the inside it’s more like a slaughter house than a sanctuary. In fact I’ve heard that on the south west corner is a drainage ditch that runs red with blood into the Kidron Valley. From what I overhear from the shepherds, every time one of you humans sins, one of us lambs have to die. So, there’s a lot of sacrificing going on.

There’s the sin offering. Once a year it’s offered for the whole congregation for sins against God such as taking His name in vain, or not tithing their first fruits and animals. If you’re a high priest, you have to sacrifice a bull; if you’re a local leader a goat; and if you’re a common person—a sheep. Since there’s more common people than priests and leaders, who do you suppose loses the most relatives?

There’s also the guilt offering which is for sins against others. And humans are always sinning against other humans—lying, stealing, and wanting what somebody else has. So you see why we sheep have very small family reunions.

Finally, there’s the burnt offerings which symbolize dedication to God, also called “continual offering” and they’re certainly continual. Every day, six days a week a one year-old lamb is sacrificed; and on the Sabbath—one lamb in the morning and one lamb in the afternoon.

And I survived Passover, which is another Jewish festival that features lamb chops.

Between Passover in April and the latter rains in November, we’re put out to pasture. As I said, we’re just south of Jerusalem, on the hills northeast of Bethlehem, so we’re close enough to hear the bleating of all the sacrifices. It’s enough to make the wool on the back of your neck stand up. So, it’s not much of a life out here—for us or the shepherds.

The shepherds are minimum wage workers that get paid in wool and lamb chops. There were a few famous shepherds like Moses and, as I said, King David, but most people look down on shepherds as the bottom rung on the ladder of life. And there are some horrible rumors about what shepherds do to pass the time out here with the sheep, but I won’t go into that while there are ewes and lambs present. Let’s just say, shepherds are not the moral fiber in the community tapestry. In face, they have such a low reputation, they’re not even allowed to testify in court.

And we sheep—even the elite sacrificial lambs—are simply the payment for the shepherds and your sins.

So, we just eat, sleep, and listen to the shepherds tell their same old stories over and over again. If I hear that story about “three shepherds walk into a inn” one more time . . .

But one silent night all that changed. We were all safe in the sheep fold, when suddenly “An angel of the Lord appeared to us, and the glory of the Lord shone around us, and we were terrified. But the angel said to us, “Do not be afraid. I bring you good news of great joy that will be for all people. Today in the town of David a Savior has been born to you; He is Christ the Lord. This will be a sign to you: You will find a baby wrapped in strips of cloth and lying in a manger.”

Suddenly a great company of the heavenly hosts appeared with the angel, praising God and saying, “Glory to God in the highest, and on earth peace to men on whom his favor rests.”

And then the angels were gone as suddenly as they came. And so were the shepherds as they hurried off to see this thing that had happened, which the Lord had told them about.

When they finally came back, they weren’t telling their usual jokes about “the traveling merchant and the farmers’ daughter.” It was like a whole different group of shepherds. Instead, they were talking about some kind of Messiah or deliverer that the prophet Isaiah had foretold:

“Surely he took our infirmities and carried our sorrow, yet we considered him stricken by God, smitten by him, and afflicted. But he was pierced for our transgressions, he was crushed for our iniquities; the punishment that brought us peace was upon him, and by his wounds we are healed. We all, like sheep, have gone astray, each of us has turned to his own way; and the Lord has laid on him the iniquity of us all.”

They were talking about the “Lamb of God that takes away the sin of the world.” That someday the whole sacrificial system will be done away with, because this Savior be sacrificed for their sins. There’s even talk that someday after that, we sheep won’t even have worry about wild animals. Something about a “lion lying down with the lamb.”

Maybe we sheep and these shepherds have been out in the night air too long. Or maybe, just maybe, we’ll live to see the day of “peace on earth, when the lion will lay down with the lamb.”

All because of this Savior, this “Lamb of God.”