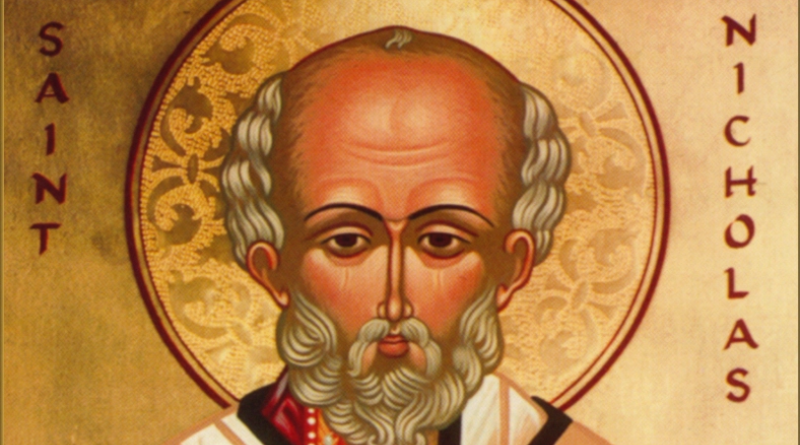 Yes, Virginia, there really was a St. Nicholas! But forget that sugary-sweet essay from The New York Sun. (Yikes, my insulin level rises just thinking about it!)

The real St. Nicholas was born in A.D. 245 in the warm, sunny town of Patara, Turkey, on the Mediterranean Sea–not the North Pole. And this gift-giver spent more time in jail than at the mall. The jolly old jailbird goes by several aliases including Kriss Kringle, Hoteiosho, Sinterklass, Pere Noel, Sancte Claus, and Father Christmas.

Nicholas was orphaned at nine when both of his wealthy parents died of the plague. Instead of using his money vacationing at a mansion on the Mediterranean—he’d been there, done that—Nicholas gave away his entire inheritance to the poor. And thus, the gift-giving legend lives on.

Well, you know how rumors get started. Before long, people were talking about how he dropped bags of gold down the man’s chimney–and how they filled all the stockings hung by the chimney with care to dry. Then people started claiming that throughout the year, down the chimney, St. Nicholas came with a bound. He looked like a peddler just opening his pack with gifts and words of encouragement for boys and girls (and adults, too).

The earliest legend, however, claims St. Nick appeared to Roman Emperor Constantine in a dream to successfully plead for the lives of three condemned army officers. (So much for the “you better be good” guilt trip of the modern-day version!) The real Nicholas was a bit more mundane. He studied Greek philosophy and Christian doctrine at his uncle’s monastery and later served as Bishop of Myra (now Demre in modern Turkey). He also served time in prison during the persecution of Christians by Roman emperor Diocletians. But the not-so jolly old elf was also disciplined by the church for punching out a fellow bishop during a lively debate at the Council of Nicea.

Although Nicholas died on December 6, 343, his troubles with church leaders didn’t stop there. The patron saint of school children, bakers, sailors, and pawn brokers was bumped from the Catholic’s calendar of saints. Perhaps the church felt the tales of St. Nicholas were a bit too gruesome. Legends include a sadistic butcher who ground up three naughty little boys and hid them in a salting barrel. When Nicholas came into the shop for a pound of wurst, the brats miraculously leaped from the barrel alive and whole! (Watch for “Goosebumps” to dramatize this as a holiday TV special.)

St. Nicholas’ remains, which are preserved in the Bari Basilica of St. Nicola in Italy, still attract more visitors than the Arctic North Pole or even Santa Claus, Indiana. (Okay, okay, taking small children to see Santa Claus’ grave is probably not a good idea!)

So, how did Mr. Nick become a Christmas character? The Reformed Churches in Germany were the first to incorporate the gift-giver into the celebration of Christ’s birth. Then the Dutch Protestant settlers imported the Sinter Claus legend to New Amsterdam (later called New York City) during the early 1600’s.

In 1822, Clement Moore wrote the famous poem called “A Visit From St. Nicholas” which begins “‘Twas the night before Christmas.” But as revisionist historians tend to do, the seminary professor turned the godly defender of the poor and helpless, into our current Marshall Fields’ Santa “dressed all in fur from his head to his foot.”

Personally, I think the real St. Nick coveys the true meaning of giving much better than the imaginary Santa who drops in one night a year to give rich children much nicer gifts than poor kids. No “Ho Ho” about it! Wishing a real Christmas to all and to all a good night.