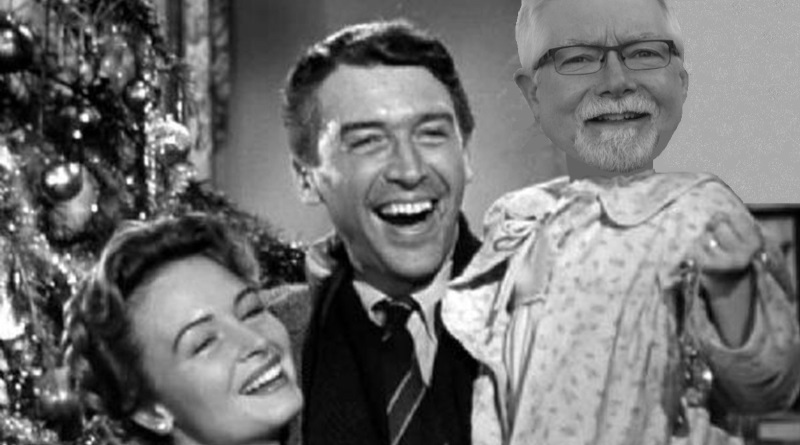 Unless you’re a) stranded on Exile Island, b) in a persistent vegetative state, or c) Amish, you’ll probably see one of the three hundred showings of It’s a Wonderful Life this holiday season. The 1946 film starring Jimmy Stewart, tells the story of George Bailey: a man with lofty dreams who is stuck in the “crummy little town” of Bedford Falls and conscience-bound to run his late father’s “penny ante” savings and loan.

It’s more than just a sappy, sentimental movie, it’s a valuable lesson in ministry. For instance . . .

Every pastor worth his or her ordination certificate, dreams of pastoring a mega church with a TV ministry and best-selling book. We have a vision and a ten-year plan.

But like George Bailey, 99.9 percent of us are stuck in a “crummy little town” with a church attendance of less than 100. (The national average is 124.) And so, we get discouraged, and perhaps despondent.

A man down on earth needs our help. . . . He discouraged. At exactly 10:45 pm tonight earth time, that man will be thinking seriously of throwing away God’s greatest gift. Franklin, a senior angel.

The whole premise of the movie, then, is receiving a heavenly view of just how incredible our impact is on this earth:

You’ve been given a great gift, George: a chance to see what the world would be like without you. One man’s life touches so many others, when he’s not there it leaves an awfully big hole. Clarence Oddbody, Angel Second Class

George discovers that his seemingly insignificant life has saved the lives of hundreds of soldiers when he saved his war-hero brother from drowning as a boy, saved the life of a family (and kept the town druggist out of prison) by discovering poison in a prescription, kept his uncle from losing his mind by keeping him from losing the family business . . . and the list goes on and on.

Oswald Chambers reminds us that “a river reaches places which its source never knows. And Jesus said that, if we have received His fullness, ‘rivers of living water’ will flow out of us, reaching in blessing even ‘to the end of the earth’ regardless of how small the visible effects of our lives may appear to be. We have nothing to do with the outflow—’This is the work of God, that you believe. . . .’ God rarely allows a person to see how great a blessing he is to others.”

Every now and then, we get a glimpse of that great blessing. I recently received an email from a woman who had visited my post on suicide:

Your article [on suicide] saved my life tonight and showed me a path toward hope. I have very little words to say, still in severe pain from the death of my boyfriend six months ago. But I felt a need to say thank you.

You see [insert your name] you really have had a wonderful life. Clarence Oddbody, Angel Second Class

If you found this helpful and/or hopeful, please share it on your social media. Thanks!”