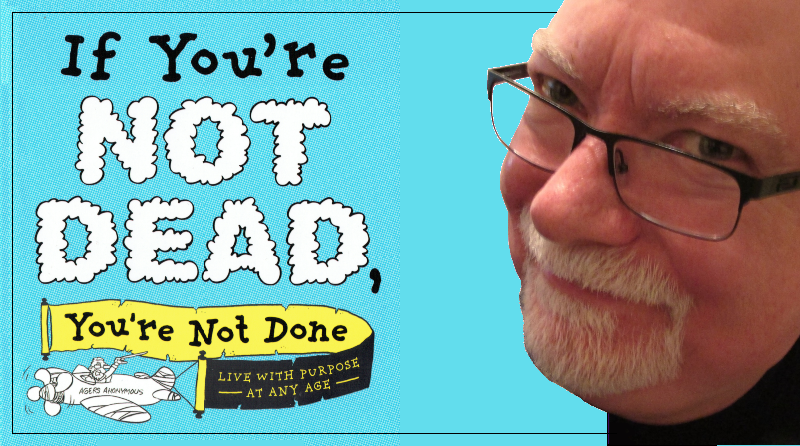 Health How To Issues
October 6, 2021February 11, 2022 jameswatkins 0 Comments aging, If You're Not Dead You're Not Done, successful aging

February 2002 Twenty-five years later, a revised version appears in If You’re Not Dead, You’re Not Done!

Even in old age they will still produce fruit; they will remain vital and green. Psalm 92:14 NLT

So while I’m still in reasonably sound mind and body, I have in my wrinkled right hand, direct from my home office in Corn Borer, Indiana, today’s top ten wishes for my fiftieth birthday.

So, I will continue to eat “food” that tastes like cardboard and ride my mountain bike every morning. And I really want that 100th birthday card from Madame President.

8. I will not complain about the younger generation

6. When I have the chance, I hope I’ll dance

Okay, my dancing is not pretty. (I always close the curtains as to not frighten the neighbors.) But I hope to remain “Forever Young” (Bob Dylan 1973) and be “always be courageous, stand upright and be true.” Okay, there was some really good music during the 60’s and 70’s.

5. I will not let my brain go to seed

I will continue to be addicted to books and magazines as long as I have eyes to read or ears for someone to read them to me. And I never want to lose my child-like wonder for DNA and DVD’s.

How did God create us so that just two tiny cells could contain all the genetic codes for my turning prematurely gray, having my grandmother’s and mother’s crooked right bicuspid, and my great-grandmother’s gift for writing?

And how do they get all the information on a round piece of plastic?

4. I will hold on tight to my dreams and ideals

After all, General Douglas MacArthur claimed, “Youth is not a period of time. It is a state of mind, a result of the will, a quality of imagination, a victory of courage over timidity, of the taste for adventure over the love of comfort. A man does not grow old because he has lived a certain number of years. A man grows old when he deserts his ideal. The years may wrinkle his skin, but deserting his ideals wrinkles his soul.” I want to die very young . . . at a very old age!

3. I won’t buy into Madison Avenue’s, Wall Street’s, or even Main Street’s definition of “success”

Robert Louis Stevenson wrote, “That man is successful who has lived well, laughed often, and loved much, who has gained the respect of the intelligent men and the love of children; who has filled his niche and accomplished his task; who leaves the world better than he found it, whether by . . . a perfect poem, or a rescued soul; who never lacked appreciation of earth’s beauty or failed to express it; who looked for the best in others and gave the best he had.”

Rabbi Harold Kushner writes, “If a person lives and dies and no one notices, if the world continues as it was, was that person ever really alive? I am convinced that it is not the fear of death, of our lives ending, that haunts our sleep so much as the fear that as far as the world is concerned, we might as well never have lived.”

1. Most of all, when I meet my final deadline, I want to hear my Editor say, “Enter in, thou good and faithful servant”

So, please keep me accountable for these goals, dreams, and ideals. And, if I ever start waxing eloquent about the good old days, remind me of two words: manual typewriters!