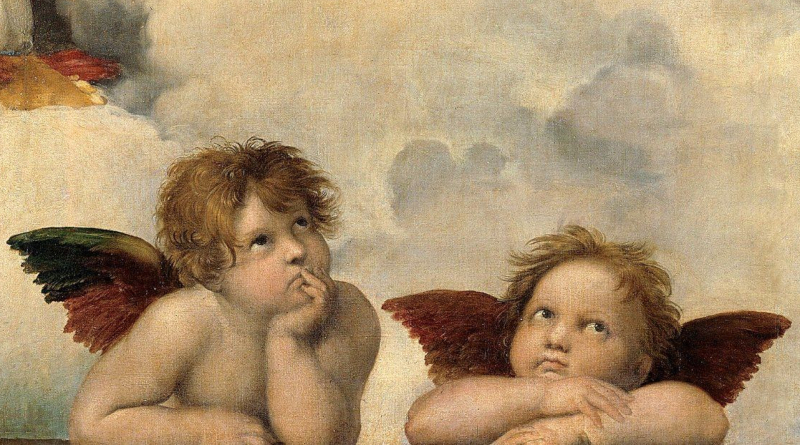 The Bible includes over three hundred references to angels, so how do heavenly angels differ from the Los Angeles variety?

One of the most popular images of angels in gift shops are those two fat cherubs with wings staring reflectively off into the heavens. Cherubim described in Scripture are described a bit differently.

So, when Martha Williamson was approached by network executives to be producer of the popular television drama “Touched by an Angel,” she agreed to the project only if she could present what she believed:

1. That angels are messengers of God, not ends in themselves.

2. That angels aren’t fairies flapping their wings and granting wishes.

3. That God is someone to reckon with.

4. That at the end of each show the angels do not win—God does.

She also stipulated, no deceased humans needing a few more good deeds to get to heaven and no deity portrayed as an old man with a beard.

Bible scholars may not agree on each point of the Hollywood script writer’s theology. However, “Touched by an Angel” is far closer to Scripture than the foul-mouthed, womanizing “Michael” which movie posters described as “an angel, not a saint.”

The Bible includes over three hundred references to angels, so how do heavenly angels differ
from the Los Angeles variety?

Contrary to “It’s a Wonderful Life” with the lovable, bumbling angel, Clarence, and Michael Landon’s heart-tugging “Highway to Heaven,” angels are not departed humans with wings and supernatural powers.

Contrary to John Travolta’s “Michael” and Nicholas Cage’s portrayal in “City of Angels,” angels are genderless and don’t marry (Luke 20:34-36), so we can assume they don’t lust after earthly women either.

One of the most popular images of angels in gift shops are those two fat cherubs with wings staring reflective off into the heavens. Cherubim described in Scripture
are described a bit differently.

Their faces looked like this: Each of the four had the face of a man, and on the right
side each had the face of a lion, and on the left the face of an ox; each also had the face of an eagle. Such were their faces. Their wings were spread out upward; each had two wings, one touching the wing of another creature on either side, and two wings covering its body. Each one went straight ahead. Wherever the spirit would go, they would go, without turning as they went. The appearance of the living creatures was like burning coals of fire or like torches. Fire moved back and forth among the creatures; it was bright, and lightning flashed out of it. The creatures sped back and forth like flashes of lightning” (Ezekiel 1:10-14).

These fearful-looking Cherubim were placed at the entrance of the Garden of Eden to prevent Adam and Eve from re-entering. No wonder the first thing angels in scriptural stories say to humans is “Fear not.”

Isaiah came face to face with another variety of angels.

Above him were seraphs, each with six wings: With two wings they covered their faces, with two they covered their feet, and with two they were flying. And they were calling to one another: ‘Holy, holy, holy is the Lord Almighty; the whole earth is full of his glory.’ At the sound of their voices the doorposts and thresholds shook and the temple was filled with smoke (Isaiah 6:2-4).

At other times, however, angels took on the form of flesh and blood as in the case of Abraham, Lot, and the parents of Samson.

Angels were created to worship God

Angels were created holy to worship God in His very presence.

All the angels were standing around the throne and around the elders and the four living creatures. They fell down on their faces before the throne and worshiped God, saying: ‘Amen! Praise and glory and wisdom and thanks and honor and power and strength be to our God for ever and ever. Amen!'” (Revelation 7:11-12).

Bible scholars believe one-third of these angels “did not keep their positions of authority but abandoned their own home” (Jude 6) in a rebellion apparently led by Satan. These fallen angels oppose God’s work (Daniel 10:12-13), inflict disease (Luke 13:16), tempt people to sin (Matthew 4:3), and spread false doctrine (1 Timothy 4:1). But this was not God’s intention for heavenly beings.

Hebrews 1:14 asks, “Are not all angels ministering spirits sent to serve those who will inherit salvation?”

A trio of angels visited Lot to warn him and his family of the impending destruction of Sodom and Gomorrah (Genesis 19). Angels closed the lions mouths when Daniel was thrown to the beasts (Daniel 6).

Angels told Mary (Luke 1:26-38) and Joseph (Matthew 1:20-21) about the miraculous conception of Jesus. An angel also warned Joseph to flee to Egypt with Mary and Jesus to avoid Herod’s jealous massacre of babies (Matthew 2:13).

We find angels ministering to Jesus in the desert following his temptation there (Matthew 4), with him as he prayed in the Garden of Gethsemane (Luke 22:43) and accompanying him when he returned to heaven (Acts 1:11).

Angels also sprung Peter from jail in Acts 12 and encouraged Paul was he was ministering in Corinth (Acts 27:23-24).

We can imply from various stories of angelic interventions that angels do offer direction and protection to God’s people, but not as a fairy godmothers to grant our wishes. As Monica from “Touched By an Angel” always tells her assignments, “I am an angel sent by God” and then gives them encouragement and instruction. Angels are God’s servants, not ours.

And we shouldn’t assume that angels are always friends of humans. Contrary to the dapper death angel Andrew on “Touched by an Angel,” the Bible’s “angel of the Lord” killed 185,000 Assyrians who had threatened to invade Jerusalem (2 Kings 19:35). Another angel killed the boasting King Herod in mid-sentence according to Acts 12:23.

The Book of Revelation teaches angels will execute God’s judgment upon a rebellious world:

The first angel went and poured out his bowl on the land, and ugly and painful sores broke out on the people who had the mark of the beast and worshiped his image.

“The second angel poured out his bowl on the sea, and it turned into blood like that of a dead man, and every living thing in the sea died.

“The third angel poured out his bowl on the rivers and springs of water, and they became blood (Revelation 16:2-4).

“The fourth angel poured out his bowl on the sun, and the sun was given power to scorch
people with fire. They were seared by the intense heat and they cursed the name of God, who had control over these plagues, but they refused to repent and glorify him.

“The fifth angel poured out his bowl on the throne of the beast, and his kingdom was plunged into darkness. Men gnawed their tongues in agony and cursed the God of heaven because of their pains and their sores, but they refused to repent of what they had done.

“The sixth angel poured out his bowl on the great river Euphrates, and its water was dried up to prepare the way for the kings from the East” (Revelation 16:8-12).

“The seventh angel poured out his bowl into the air, and out of the temple came a loud voice from the throne, saying, ‘It is done!’

“Then there came flashes of lightning, rumblings, peals of thunder and a severe earthquake.
No earthquake like it has ever occurred since man has been on earth, so tremendous was the quake” (Revelation 16:17-18).

Angels are all around

“Touched by an Angel” certainly doesn’t have the budget to cast all of God’s angels. The Apostle John describes a scene of “angels, numbering thousands upon thousands, and ten thousand times ten thousand” (Revelation 5:11).

The ancient Talmud, a Jewish book of religious law, claims every Hebrew had 11,000 guardian
angels. Later, Martin Luther calculated the angel population at ten trillion—enough for over one thousand for every person—Jew and Gentile—on earth.

We may never see with earthly eyes these heavenly beings or know the many ways they have protected and guided, but they are real. They are active. And they are, as the producer of TV angels warns, “messengers of God, not ends in themselves.”

Reprinted from The Why Files: Are There Really Ghosts? Copyright © 2000 James N. Watkins.