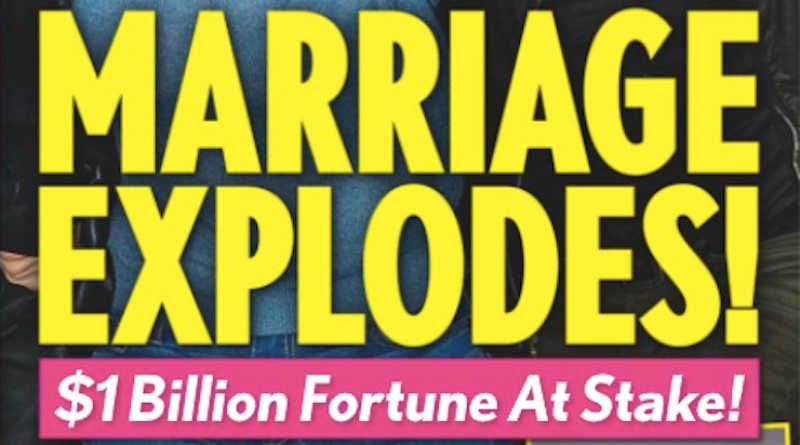 I have in my right hand, direct from my home office in Corn Borer, Indiana, the Top Ten Reasons I’m Not Divorcing My Wife

Dating, for me, is too much like a job interview.

Dressing for the interview: I’ve got to look casual (“I’m not intimidated by some snooty matre’ de”) and yet stylish (“This date is important to me, so I am looking sharp!”).

The actual interview: “Do you like the swordfish here?” “Have you read John Grisham’s latest novel?” “Did you hear that Western Widgets was consolidating with Amalgamated Gismos?” “Do you know you have spinach stuck between your teeth?”

And finally waiting for the phone call: If I call her the next day, is that going to look like I’m being pushy or, worse, pathetically desperate?

Plus, while you’re looking for work, you don’t get paid or receive benefits!

I like the security of twenty-two years (and counting) of pretty good performance reviews. Why should I go looking for another job?!

9. It will really hurt book sales if the author of a book on family values dumps his wife for an exotic dancer.

Can you see the headlines in the grocery store checkout line?

Tabloids and investigative TV shows are looking for this kind of stuff. So, I really don’t want some camera crew showing up in my driveway as I cover my face and speed away.

And publishers really aren’t happy with such lack of credibility, so I’d have to change my name, my writing style, and go back to writing for the weekly shopper in Battle Creek.

Besides, you probably wouldn’t take a book about “family values” too seriously (you are taking it seriously, aren’t you?) if you knew I had been divorced three times and was living with a stripper twenty years my junior. (I haven’t! I’m not!)

I have joked that if Lois were a better lover, she’d be a widow. And while I’m willing to risk death-defying sex with my wife, I’m really not that crazy about all the deadly diseases out there.

For instance, according to my doctor, genital warts is the number one sexually-transmitted disease today. And, they can only be removed by burning or cutting. There’s no way I want nitric acid or a scalpel anywhere near my y-chromosome!

Of the forty diseases that the Minnesota Health Department has identified as being spread through sexual contact, some of them are fatal (AIDS), others can damage one’s sexual equipment (chlamydia and gonorrhea), and at least one (syphilis) if not caught early can cause blindness, heart disease, paralysis, brain damage, and death.

And I’m not impressed with “protected” sex. Besides all the excitement of having sex with latex, condoms fail one out of five times to prevent pregnancy (and child support payments) and one out of three times to stop the spread of sexually transmitted diseases.2

I choose to stay faithful—and healthy. Which brings me to . . .

7. I’m not that crazy about dying prematurely.

I’ve spent too much time on my mountain bike being chased by dogs and eating fat-free (and taste-free) food, to be killed off prematurely by a divorce.

According to a seventy-year prospective study reported in the American Journal of Public Health and the American Psychologist, divorce is comparable to two packs of cigarettes a day.3 Those divorced had a 40 percent greater risk of “premature death” than those who were steadily married. Men who remained single following a divorce fared even worse with a 120 percent greater chance of dying sooner. Women remaining single after divorce papers increase their risk by 80 percent.

And divorce can increase your chances of terminal cancer!4 That’s what Dr. David B. Larson, president of the National Institute for Healthcare Research, claims following “extensive research.” Divorced men were also found to be twice as likely to die of cardiovascular disease than their married counter-parts. But wait, there’s more. Larson found that three times more divorced people commit suicide than non-divorced.

That’s why I’m going to exercise, eat right, and stay married! (And staying married is actually easier than jogging and eating oat bran.)

6. A hit-man is cheaper than a divorce lawyer.

A local yokel recently paid a hit-man five-thousand bucks to have his wife’s car blown-up (with the stipulation that she was in it) . A friend recently divorced his wife and will end up paying over five-hundred thousand dollars in costs during his life time.

A hit-man is cheaper than a lawyer.5

Let’s begin with the lawyer’s retainer. Hourly costs in handling the divorce (from fifty bucks up to two-hundred and fifty per hour) are deducted from the retainer fee, but that’s just the beginning.

Then, there’s court costs which can include fees for filing the case, transcriptions of the hearing, subpoena fees, photocopying costs, postage, telephone calls, psychiatric exams, and social service reports. (And, if you believe Grisham’s The Firm, legal bills include some not-so-legal “secretarial” services.)

Now that your adding machine is warmed up, punch in child support including medical and dental costs, health and life insurance, and even college tuition.

Oh, and don’t forget; your spouse is probably not going to want you hanging around the house, so add in your own housing and utility costs.

Yikes! Five thousand dollars for a good hit-man doesn’t sound like a bad deal compared to a divorce. But a well-qualified marriage counselor is even cheaper–even at seventy-five bucks per one hour session for a year, that’s less than four thousand! (And you don’t have to spend the rest of your life making license plates.)

Lois and I chose a year of marriage counseling!

Professional athletes who snort coke, kick cameramen in the crotch, and let their hormones determine their game plan with the opposite sex claim, “Hey, I’m not a role model.”

As an author and speaker, as well as simply a guy who shows up at Little League games and my local church, I don’t have that luxury. Not that I want to snort coke, kick cameramen in the crotch, and let my hormones determine my game plan with the opposite sex. But like it or not, I am a role model.

“Well, if Watkins can do it–with half the Laker Girls–then so can I!” (Re-read the last sentence in Number 9!)

“Wow, if somebody who writes books about the importance of marrying gets a divorce, what chance does my marriage have?”

So, while I’m really not that crazy about carrying that much responsibility, my actions do have an effect on my readers, my family, and the local Little League team.

4. I’ve invested too much time, money, and effort into this relationship.

In twenty-two years of marriage, I’ve logged 192,720 hours with Lois. And, when I figure that, together, we’ve made and spent nearly a million bucks keeping each other and two kids housed, clothed, fed, and watered, that’s a major investment!

I wouldn’t walk away from a million-dollar business. So, it makes sense to keep the assets I’ve accrued.

The American Journal of Public Health also revealed that a parent’s divorce also decreases the children’s life expectancy! The chance of premature death increases 44 percent for children under twenty-one whose parents divorced. And if Lois and I break up, Faith and Paul are more likely to divorce from their spouses.6

Plus, David Popenoe in Life Without Father claims that 70 percent of long-term prison inmates grew up in fatherless homes, as did 60 percent of rapists and 72 percent of teenaged killers.7 Yikes!

Maybe staying together “for the children’s sake” is not a bad idea.

A hot August night in 1974, I stood in front of a packed church of friends and relatives and promised to “love, honor, and cherish” Lois “till death do us part.”

This wasn’t a “cross my heart and hope to die, stick a needle in my eye” playground promise. There was no “stack of Bibles.” There wasn’t even any “collateral.”

This was a once-in-a-life-time promise pledged to my parents, grandparents, aunts, uncles, cousins, grand-parents, future in-laws, former baby-sitters and school teachers, life-long friends, business partners, three members of the clergy, and a church full of well-wishers.

If I don’t keep my promises to the bank or utility company, they simply repossess my Honda or turn off the electricity. But if I divorce Lois, I’ve broken faith with not only my wife, but with a whole sanctuary of witnesses.

Sure, my brother may still trust me to watch his cat when he’s out of town and I can probably still borrow ten bucks from my friends, but I’ll have broken the biggest promise of my life. I want to be someone who can keep a promise.

Cross my heart—and hope not to die prematurely.

I think we have a pretty good “love triangle” of eros, phileo, and agape’ (Read my chapter on love).

Marriage, however, is sort of like a roller-coaster ride. There are the highs and lows of “sickness and health,” “richer and poorer,” and “better and worse.” But if you keep your arms and legs (and other body parts) inside the car at all times, you’ll remain safe through the ups and downs, turns and spirals.

For instance, Lois and I have been through some white-knuckle rides: my four surgeries in three hospitals in two months; her struggles with the “glass ceiling” as well as clinical depression and chronic fatigue syndrome; a junior high daughter who thought we had the collective I.Q. of a kiwi; a dangerously creative son with attention deficit disorder; plus all the typical in-law, financial, and child-rearing struggles.

But the “highs” have made the “lows” worth it!

That’s why I’m not divorcing my wife.