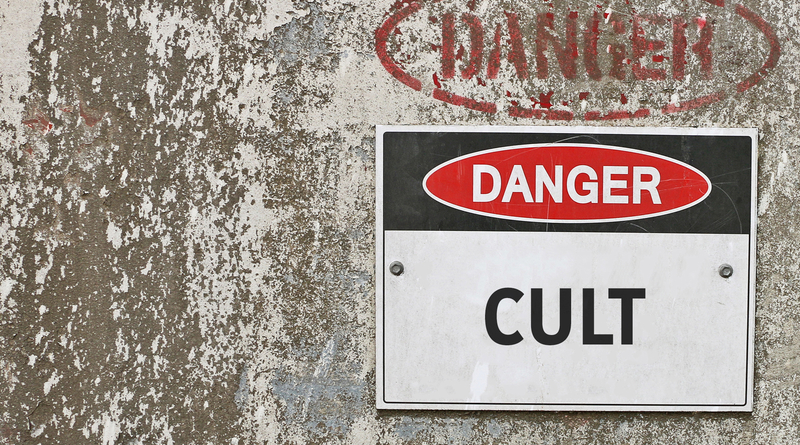 As as our world becomes more and more polarized by race, religion, political beliefs, etc. many groups are taking on the characteristics of a cult. Here are the danger signs originally published in The Why Files:

Over nine hundred followers of Jim Jones died by drinking poisoned Kool-Aid. Approximately 470 members of the Movement for the Restoration of Ten Commandments of God in Uganda set fire to their church and themselves. Eighty-six Branch Davidians—twenty-five which were children—died in the flames of David Koresh’s Waco compound. Thirty-nine members of Marshall Applewhite’s “Heaven’s Gate” committed suicide hoping to leave their “containers” to rendezvous with aliens traveling behind the Hale-Bopp comet.

Some of the fastest growing cults are the “hate groups” who, rather than merely killing themselves, go on killing sprees against their ideological enemies. Timothy McVeigh, the Oklahoma City bomber, and the numerous abortion clinic bombers are classic examples.

1. The group believes it—and only it—knows the truth.

If a group claims only they know the true truth or that they will be the sole survivors of some kind of cosmic calamity, they may be a cult. The Heaven’s Gate group believed that only they would escape earth’s destruction. Jehovah’s Witnesses believe that only they will be saved following the biblical apocalypse.

Some groups have their own “scripture” apart from or in addition to what orthodox Christians consider to authentic. Christian Scientists have Mary Baker Eddy’s Science and Health which claims that “Jesus was the offspring of Mary’s self-conscious communion with God.” The Jehovah’s Witnesses New World Translation rewrites traditional scripture to fit its theology that only they will be saved at the end of the world. Mormons, for instance, have several additional books including The Book of Mormon, which is believed to be translated from gold plates, and Doctrines and Covenants based on founder Joseph Smith’s visions.

Some more traditional religious groups also have extra-biblical documents. Some argue that Seventh Day Adventists elevate the writing of their founder, Ellen White, to the level of Scripture while many members claim this is not true. The Roman Catholic Church teaches that the pope’s “ex cathedra” pronouncements are “infallibly true” and “must be obediently accepted.”

With so many groups claiming to have a corner on truth and interpretation of scripture, it’s important to take the Bible in context.

(And simply having extra-biblical documents doesn’t make it a “cult.” Watch out for these additional characteristics of a cult.)

2. The members are isolated from family and former friends.

Cult leaders use peer pressure and paranoia to isolate members from the “outside” world. According to Mark Muesse, professor of religious studies at Rhodes College in Memphis, Tennessee, “Such groups tend to attract individuals who share their sense of isolation from the rest of society, who are struggling with a sense of identity or purpose in life.”

The cult creates a sense of “us” against “them” that strengthens the bond between members—and the paranoia. The Branch Davidians seem to have embraced Koresh’s delusions by stock-piling food and weapons at their Waco “compound.” (Unfortunately, their paranoia was not completely unfounded.)

David Reed, professor of pastoral theology at Wycliff College at the University of Toronto, believes fear, insecurity, and loneliness of people are exploited by cult recruiters. ” Members are attracted to the cult by friendship and communal embrace. The one event in our lives that is more fearful is death. It can be seen as an attractive option to die communally and ritually . . . as seems to have happened in California.” But for mass suicides to occur, Reed explains “individuals in the group must first have had their previous world—with relatives and friends—dismantled so that no attachment to the real world remains.”

3. The leader believes he or she knows what is best for individual members.

Because the founder of the cult is seen as the conduit through which “God”—or aliens—has revealed the truth, there can be no questioning of his or her leadership and directives. The threat of being excommunicated from the only source of salvation, keeps members under the often oppressive power of the leader.

This absolute power and knowledge—with no accountability—often leads to tragic consequences!

4. Cults tend to be emotionally and, sometimes, physically and sexually abusive.

Cults often put recruits through a grueling indoctrination period. Kevin Crawley of the University of Iowa lists these common “indoctrination techniques to recruit and maintain members into a totalist ideology.”

1. Subjection to stress and fatigue

7. Use of auto-hypnotism to induce ‘peak’ experiences

Once the recruit has been mentally and emotionally dominated by the leader or group, physical and even sexual abuse may follow. Mo David, of the sixties Children of God cult (now called The Family), encouraged his female members to recruit new members by being “flirty fishers” who offered sex in exchange for attendance at his teaching sessions. Both Jim Jones and David Koresh believed that by having sex them their female members would become more like Christ! (Koresh allegedly had sex with young girls as part of initiation rites.) Six of the dead Heaven’s Gate members, including Applewhite, had been castrated as a part of the group’s dogma against sexual differences.

Often cult members are required to work long hours recruiting and raising money for the cult. The motivation for slavish labor is often a salvation by works mentality. Jehovah’s Witnesses believe their salvation is, in part, assured by witnessing door to door.

5. “Christian” cults have a distorted view of Christ.

Just because a cult claims to be “Christian” doesn’t mean it’s following the genuine Jesus.

“Christian” Science believes Jesus is merely a grand “spiritual idea.” Jehovah’s Witnesses teach that Jesus “is no more than a perfect man” rather than God incarnate. His resurrection was spiritual, so “The man Jesus is dead, dead forever.” Mormon leader Brigham Young declared that God “. . . was once a man in mortal flesh as we are, and is now an exalted being.” Thus Christ was simply a human on his way to godhood. Sun Myung Moon, the founder of the Unification Church, believes that the priest Zecharius was the father of Jesus and thus he was “a human being and not a supernatural person.” Moon believes he is the Messiah!

So, what’s the difference between a social or religious group and a “cult”?

Some cult-ish characteristics creep into all social groups from business to education to organized religion. We’ve all known a power-hungry, emotionally-abusive boss or know-it-all professors. Coaches can become emotionally and physically abusive to their players. The Roman Catholic Church teaches that it is “the one true Church.”

The degree and number of ways the group deviates from what is considered socially acceptable and orthodox is a clue. Denominations often differ on the finer points of theology, but most consider Jesus as divine and their leaders not. Big business tries to conform its workers into a “corporate culture” which controls employees dress and thinking. Amway and other multi-level marketing companies often exhibit cult-like characteristics.

Adapted from The Why Files (Concordia Publishing House, 200) To order a copy, click here.