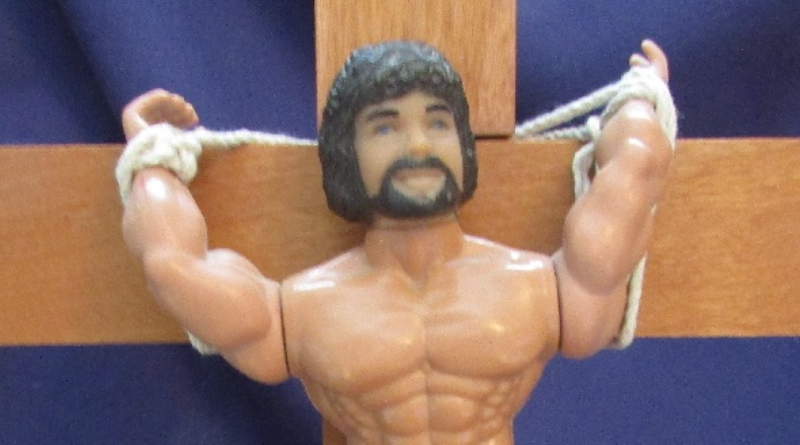 If you’re turned off by Jesus, you’re probably confusing him with some ultra-conservative caricature. (Excerpted from The Why Files: Are There Really Ghosts?)

This is blasphemy, I thought. My four-year-old son had taken his World Wrestling Entertainment action figure and had tied him on a wooden cross creating a National Endowment for the Arts version of a crucifix.

This “Jesus” had muscles on top of muscles, pecs the size of couch cushions; black, curly hair; and a Coppertone tan. This was not the cardboard cut-out Jesus from Sunday school class or from the stereotype from the movies.

Most Hollywood portrayals of “Jesus” look like he stepped off the cover of a romance best-seller—blow-dried auburn hair with blonde highlights, immaculately manicured nails, a pure white robe, and of course, heavenly good looks.

But wait, maybe Paul’s “action-figure Jesus” is closer to the original.

First, Jesus was Jewish—not white Anglo-Saxon. (Are there no Jewish actors in Hollywood?!) And since this was before the days of extra-strength antiperspirant and stain-removing detergent, his grungy robe probably had huge sweat rings, and his curly black hair didn’t exactly glisten from a recent hot oil treatment. And he did have big muscles—at least enough brawn to bounce the money changers out of the temple on their self-righteous rears. And, according to Isaiah’s prophecies, he wouldn’t have won any beauty contests.

But worse than what artists and movie producers have done with the physical characteristic of Jesus is what theologians, church leaders, and revisionist historians have done to his character! Let’s take a look at the differences between the genuine Jesus and the counterfeit Christs.

While the Pharisees, the religious leaders of Palestine, preached hundreds of human laws and regulations to follow in order to be “righteous,” the genuine Jesus had just two:

The counterfeit Christ and his followers have long lists of “do’s and don’ts” that are preached as “gospel.” And everyone who doesn’t subscribe to their legalistic list are condemned to hell. We see them protesting with signs that read “God hates fags,” “God hates baby-killers,” and “God hates [everybody we hate]!” (See my rant: God hates godhatesfags.com.)

But the genuine Jesus has just two laws: love God and love people. True followers of Jesus may not agree with the lifestyles and opinions of everyone (in fact, they shouldn’t), but they will be the first to show compassion to those they disagree with. That’s why Jesus hung out with drunks, prostitutes, “tax collectors,” and “sinners.” He loved people. He didn’t love all their actions—and didn’t join them in all their behaviors—but He showed them that he loved them. True followers of Jesus are not preaching against people with addictions; they are volunteering at rehabilitation programs at local shelters. They’re not bombing abortion clinics; they’re working in the pro-life Crisis Pregnancy Centers.

Have you noticed how some followers of Christ jealousy guard their position and perks, whether they be deacons, pastors, or denominational executives? They insist on being referred to as “Bishop Jones,” “Reverend Smith,” or “Deacon Brown.” They enjoy the reserved parking spots, the large offices, and the sense of honor bestowed by their followers.

Not the genuine Jesus! He condemned the Pharisees’ status-seeking and ego-centric attitudes by warning them that the servant (the church custodian, the nursery worker, the person shoveling snow off the reserved parking spots) is the greatest in his Kingdom.

Jesus also had withering words for the wealthy who oppressed—or simply ignored —the poor.

Blessed are you who are poor, for yours is the kingdom of God. But woe to you who are rich, for you have already received your comfort (Luke 6:20, 24).

Genuine followers of Jesus have a sense of joy and satisfaction in who they are—at whatever “level” on the social or ecclesiastical ladder they may find themselves.

Jesus said, “I have told you this so that my joy may be in you and that your joy may be complete (John 15:11).

If you’ve been turned off by a church where crucifying politicians is more popular than proclaiming the crucified Christ, that group of believers may be following a counterfeit Christ. And if the TV preacher spends more time attacking those who don’t follow his particular brand of theology, then he’s probably not preaching the genuine Jesus, either.

While Jesus spoke to a culture that was dominated by the political corruption of Roman occupation, he never once organized a political action committee or sent out one voting record score sheet of the Imperial Senate. Instead, he spoke about peace.

“Peace I leave with you; my peace I give you. I do not give to you as the world gives. Do not let your hearts be troubled and do not be afraid (John 14:27).

“I have told you these things, so that in me you may have peace. In this world you will have trouble. But take heart! I have overcome the world” (John 15:33).

And, He also spoke of unity—not pew politics or doctrinal debates. Churches that are more interested in separating themselves—not only from the world, but from other believers who don’t subscribe to their particular point of view—may be following the counterfeit Christ.

“My prayer is not for them alone. I pray also for those who will believe in me through their message, that all of them may be one, Father, just as you are in me and I am in you. May they also be in us so that the world may believe that you have sent me. I have given them the glory that you gave me, that they may be one as we are one: I in them and you in me. May they be brought to complete unity to let the world know that you sent me and have loved them even as you have loved me” (John 17:20-23).

Perhaps the world is yet to know the genuine Jesus because the universal church is so far from “complete unity.” Of course, there will always be doctrinal differences, but St. Paul urges Christians to make every effort to keep the unity of the Spirit through the bond of peace. There is one body [of Christ] and one Spirit—just as you were called to one hope when you were called—one Lord, one faith, one baptism; one God and Father of all . . .” (Ephesians 4:4-6).

There is at least one more kind of counterfeit Christ—the one who merely loves us, but makes no demands on our lives.

“Whoever has my commands and obeys them, he is the one who loves me. He who loves me will be loved by my Father, and I too will love him and show myself to him” (John 14:21).

But don’t take my word on it! I’d invite you to explore for yourself the four books in the New Testament that record the genuine Jesus’ teachings— Matthew, Mark, Luke and John. (Read from a modern translation such as The New Living
Translation, The New Revised Standard, or The New International Version. Or check out what the Apostle John wrote about knowing Christ personally.)

You’ll discover someone who is real, honest, and authentic. And not at all like the caricatures of Christ we often see in the theater, television, and—unfortunately—in some of today’s churches.

That’s why I decided to leave the “Jesus” with the black curly hair, dark complexion, and mountains of muscles on the cross. It reminds me to follow the genuine Jesus rather than culture’s counterfeit Christs.

Jesus: His Life and Lessons: Discover the life and lessons of Jesus. This user-friendly book arranges His life in chronological order and His teachings arranged by topics. Also includes a glossary to make it even easier to explore the gospels. No commentary, no doctrinal states, just 100% Jesus.