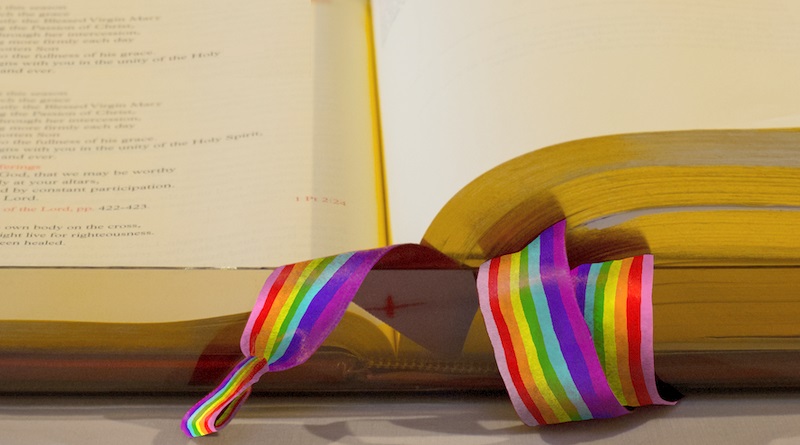 Homosexuality is one of the most polarizing subjects today in the culture, courts and the church. One extreme pole pickets with signs spewing “God Hates Fags.” On the opposite extreme are those proclaiming God blesses same-sex relationships. And somewhere in between are sincere, Bible-believing Christians who are trying to find a balance between these polar opposites.

It’s an issue, that as a follower of Jesus, I want to to address with truth and grace. I’m not here to judge either side.

I’ve tried to “speak the truth in Love” on this subject in my three books on sexuality. In my post, Coming out: my sexual identity crisis, I’ve tried to be transparent concerning my own gender identity issues. And I’ve posted on some of the sources of sexual confusion and homosexual orientation.

So, here’s my attempt to find an accurate and compassionate position on the subject using my post, What does the Bible really say?, as a guide. (Let’s all sing the old children’s church chorus, “I stand alone on the Word of God, the B-I-B-L-E!”)

One position: Jesus taught that one can be born with a homosexual orientation.

“Some are born as eunuchs, some have been made eunuchs by others, and some choose not to marry for the sake of the Kingdom of Heaven. Let anyone accept this who can” (NLT).

In Jesus’ time—first century Palestine—eunuchs were unable to reproduce or were castrated so they could work in harems without being, shall we say, “distracted.”

But let’s read the context beginning at 19:8. (As I mentioned in a previous, “With over 31,000 verses from which to choose, you can find a verse to prove your point on almost any subject.)

Jesus replied, “Moses permitted divorce only as a concession to your hard hearts, but it was not what God had originally intended. And I tell you this, whoever divorces his wife and marries someone else commits adultery—unless his wife has been unfaithful.”

Jesus’ disciples then said to him, “If this is the case, it is better not to marry!”

“Not everyone can accept this statement,” Jesus said. “Only those whom God helps. Some are born as eunuchs, some have been made eunuchs by others, and some choose not to marry for the sake of the Kingdom of Heaven. Let anyone accept this who can (19:9-12)

So, studying the context, it appears to mean born so as not able to have children, rather than saying some people are born homosexual, bisexual, transgender or questioning.

And the Bible never uses the words homosexual and eunuch interchangeably. Eunuchs are never referred to in Scripture as being in sin, in fact in Acts 8, a devout Hebrew eunuch is on his way to Jerusalem to worship when he meets the apostle Phillip. Long story short, Phillip shows him from scripture that Jesus is the long-awaited Messiah, he comes to Christ and is immediately baptized into the faith.

So, this particular teaching of Jesus seems to be about reproduction, not orientation!

Another claim: Jesus never taught on the subject of homosexuality

We do know that homosexual behavior was prevalent in the Roman culture—and Israel was under Roman occupation. So, we can’t be sure that Jesus didn’t address it, but it’s not mentioned in any of the gospels. There’s no record of addressing Caesar worship or the harsh Roman occupation, except to teach his followers to honor soldier’s and tax collectors authority. Another possibility is that the Mosaic was very clear in forbidding homosexual acts, so it would not be an issue among the Hebrews.

Another position: Homosexuality is a sin caused by men and women refusing to acknowledge God’s lordship:

So God abandoned them to do whatever shameful things their hearts desired. As a result, they did vile and degrading things with each other’s bodies. They traded the truth about God for a lie. So they worshiped and served the things God created instead of the Creator himself, who is worthy of eternal praise! Amen. That is why God abandoned them to their shameful desires. Even the women turned against the natural way to have sex and instead indulged in sex with each other. And the men, instead of having normal sexual relations with women, burned with lust for each other. Men did shameful things with other men, and as a result of this sin, they suffered within themselves the penalty they deserved (Romans 1:24-27).

So, here’s my first point:

The Bible speaks against homosexual behaviors, but not orientation or gender identity issues

Many argue that the Bible is very clear based in the Old Testament and the New that homosexual behavior is not part of God’s plan:

God himself commands, “Do not practice homosexuality, having sex with another man as with a woman. It is a detestable sin” (Leviticus 18:22).

Other translations translate this passage with:

men who have sex with men (NIV).

Another view: The Bible condemns homosexual prostitution, not loving relationships

The word translated “effeminate” is malakos, which literally means “soft, soft to touch.”

Other versions get pretty loose with the translation: “passive homosexual partners” (NET), “male prostitutes” (HCSB), and “those who make women of themselves” (DBT).

The only other time the word is used is to describe what John the Baptist’s clothing was not:

Since the word malakos is not used anywhere else in the New Testament, it’s impossible to know exactly the meaning. “Soft” may have been slang at that time as “gay” is used today. So, one side of the debate can argue it means “effeminate,” the other “a materialistic person wearing luxurious clothing.”

The other Greek word used in 1 Corinthians 6 is more specific: arsenokoítēs

One side translates the word as “one who lies with a male as with a female,” and the other as “male prostitution.” Paul warns against “joining self with a prostitute” right after verses 9-11, so those in support of same-sex relationships argue that Paul is talking about prostitution in the letter, not “loving, committed” homosexual relations.

So, here’s my point—actually, I have two.

Trying to present the teaching of the B-I-B-L-E on LGBTQ is nearly impossible if we depend on specific verses that both sides use to make opposite arguments. So, rather than studying individual words, we need a view from 30,000 feet.

I’ve worked as an editor for nearly 40 years. There are line editors—who obsess about spelling and comma placement. And there are content editors who look at the entire manuscript and make sure it’s consistent in thought through out. One looks at the words, one looks at the entire book!

So what does the entire Book say about sexuality throughout its pages?

There are two general principles throughout Scripture.

God uses male and female to reflect his image (Genesis 2).

God is infinitely complex and requires two genders to provide even a faint reflection of his character.

You neglected the Rock who had fathered you;
you forgot the God who had given you birth (Deuteronomy 32:18).

Notice in the very same verse God is described as both a father and mother!

Yet Jerusalem says, “The Lord has deserted us;
the Lord has forgotten us.”
“Never! Can a mother forget her nursing child?
Can she feel no love for the child she has borne?
But even if that were possible,
I would not forget you! (Isaiah 49:14-15).

This is what the Lord says:
“I will give Jerusalem a river of peace and prosperity.
The wealth of the nations will flow to her.
Her children will be nursed at her breasts,
carried in her arms, and held on her lap.
I will comfort you there in Jerusalem
as a mother comforts her child” (Isaiah 66:12-13).

And this powerful image:

Like a bear robbed of her cubs,
I [God] will attack them and rip them open;
like a lion I will devour them—
a wild animal will tear them apart (Hosea 13:8).

The female side of God is also captured in Jesus likening himself to a mother hen gathering her chicks under wings for protection (Matthew 23:37, Luke 13:34).

And in his parables of the lost sheep and lost son in Luke 15:8-10, Jesus illustrates God as a woman looking for her lost coin.

God does not fit into earthly categories. Tim Hansel writes, “If we try to confine God in a box, he kicks the sides out and turns it into a dance floor.

Again, God is so complex, humans had to be created as two separate genders to give us even a glimpse of his character.

So, maybe that’s why God gets so “bent out of shape” by same-sex unions: they bend his image out of shape! A male-male union doesn’t reflect God image any more than a female-female union.

In the Old Testament God’s passionate love for his people is illustrated in love, marriage and sex. His plan is for sex in a male/female, life-long, covenant relationship.

The Song of Solomon—which was my favorite book in junior high—is filled with explicit images of female anatomy.

That’s why God uses a very personal and permanent symbol to remind Hebrew males that they are God’s people: circumcision! A good Hebrew boy could not have an affair with a pagan woman without a really awkward discussion of why he’s “different” than other men.

In the New Testament, Paul writes plainly that the “mystery” of intercourse illustrates Christ’s union with the church:

As the Scriptures say, “A man leaves his father and mother and is joined to his wife, and the two are united into one.” This is a great mystery, but it is an illustration of the way Christ and the church are one (Ephesians 5:32).
Meanwhile, John compares the New Jerusalem to “a bride adorned for her husband” (Revelation 21:2). Sexual purity and “one flesh” are symbols of the pure and intimate relationship God want to have with his people.

God is teaching that marriage and intimacy are only a shadow of the amazing relationship God has planned for his people.

The history of the Bible gives example after example of the disastrous consequences of heterosexual adultery, polygamy, incest and rape. The entire book of Hosea illustrates God and human’s relationship as the prophet is commanded to marry a prostitute and to keep forgiving her for her blatant adultery. He is even told to buy her back off the slave block—just as God the Father buys us back with the death of God the Son.

So, God is very protective of that symbol. And that symbol is distorted by not only homosexual behavior, but heterosexual adultery, incest, polygamy and other sexual sins.

So, again, homosexual orientation is not a sin!

• It’s not about orientation. It’s about obedience

Copyright © 2019 James N. Watkins. Permission is granted to print off 50 copies without written permission and to repost as long as it is properly attributed with a link to jameswatkins.com

• God loves gays
• “Coming out” My sexual self-identity crisis
• It’s about obedience, not orientation
• God hates hate
• Speaking with truth . . . and grace
• Why are some people so bent out of shape about homosexuality?

Churches and organizations with a biblical worldview are being banned from social media platforms for their “hateful” and “un-woke” speech—which is simply sharing what they believe the Bible says about moral issues. Many of us are sensing the need for alternative avenues to continue speaking truth. That why private email lists are so important! Please click here to sign up for my bi-weekly emailing with lots of encouragement and entertainment, as well as an exclusive free chapter “All’s Not Lost to Alzheimer’s” from If You’re Not Dead, You’re Not Done. What a deal! (And I promise to never, ever share my list.)