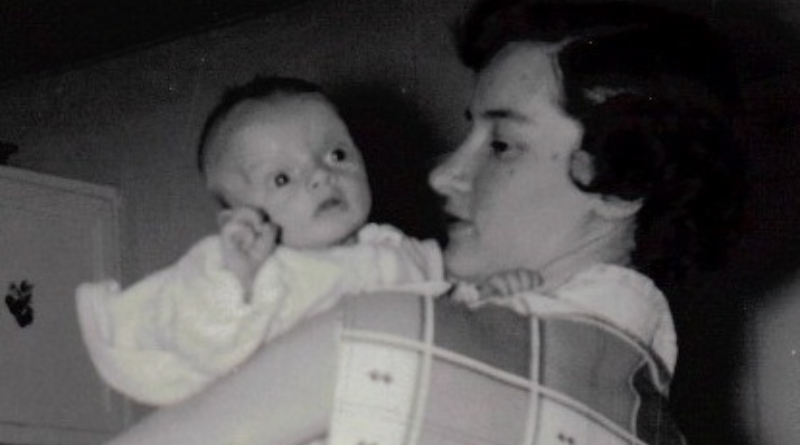 I have in my right hand, direct from my home office in Corn Borer, Indiana, today’s category: top ten things my Mom taught me. Actually, there are probably thousands: how to tie my shoes, do laundry, decorate Christmas cookies, ride a horse . . . the list goes on and on. But here are, what I consider, the top ten:

Most grade-school problems—and even adolescent angst—could be solved with, “Here, have a cookie.” Mom was well ahead of the medical science of her day. Dutch researchers recently reported in the respected medical journal, Lancet, that the dark chocolate in her homemade Toll House cookies contains antioxidants. These, and I quote, “play an important role in protecting against heart disease, cancer, and other health conditions.” Meanwhile Greek researchers have found that dark chocolate “helps prevent dangerous blood clots and reduce heart disease.”

Monday was always laundry day, so early in the morning Mom made her way through the piles of clothes scattered throughout my room. She would sniff each item, tilt her head—as if in deep thought—and then decide whether to leave it in the pile or toss it in the clothes basket. Her philosophy was, “If it’s doubtful, it’s dirty.” It has served me well, not just for laundry, but the complex moral issues we face in today’s world. If there’s any doubt, it’s wise to avoid it.

8. Real men know how to sew and iron

Mom’s training provided sewing skills for designing home-made puppets and their costumes for the well-traveled “Platypus Players.” (That would make her Mr. Platypus’ grandmother!) And knowing how to sew on a button, hem pants cuffs and iron dress shirts has kept me looking as respectable as I’m able while speaking at colleges and conferences.

7. Real men know how to type

It’s a skill I’ve employed since Mom and Dad bought me a Royal manual typewriter in junior high right up to this very second as I type this list on a laptop computer. It’s one of the most important skills I’ve ever learned!

Mom served as “audience” for innumerable—and I’m sure unbearable—magic and puppet shows during my early years. Mom and Dad even made patient parishioners as I “preached” from the slanted roof of my toy-barn “pulpit” and illustrated my messages with my homemade flannel graph board. And Mom was my very first “roadie,” chauffeuring me to perform at children’s parties, Boy Scout banquets, church carry-in dinners and Battle Creek’s Junior Theatre as well as numerous trips to Abbott’s Magic Company for new effects. She was a true patron of the arts.

5. A simple life is a rich life

Our family enjoyed delicious home-grown food, home-made meals and wonderful desserts. And as we traveled the United States during summer vacations, I thought we were living the high life. We even had a “summer home”—a rented cabin for a week at Pine Lake Village in northern Michigan. And our two and a half-acre “estate” featured a menagerie of dogs, cats, guinea pigs, rabbits, two ducks and a sheep. Only later did I learn that Mom and Dad were “middle class” and had sacrificed so much to provide new bikes, an air rifle, braces, a unicycle and a guitar, along with bell bottom jeans and paisley shirts. And I still prefer the bologna salad sandwiches from the old Coleman metal cooler on road trips than any steak from a stuffy five-star restaurant. Which brings me to . . .

4. A penny saved is a penny earned

Wednesday was shopping day as Mom drove to three or four different grocery stores throughout the town to get the best deals on meat, produce, fruit, and more. (It helped that gas was 25 cents a gallon.) She also saved thousands of dollars by home canning and freezing—and it was far tastier than anything bought at the store in a tin can.

3. Listening is more important than talking

We never suspected the reason Mom employed my brother and me to dry and put away dishes had little to do with dishwashing. We assumed it was a violation of child labor laws, but it was actually a clever ploy to spend quality time with her sons to discuss the issues facing two boys growing up in the 50s and 60s. And despite her never-ending domestic chores, she always had time to listen to family and friends who regularly called her personal counseling practice. She also served as a Sunday school counselor at a large church where she dealt with children who were discipline problems, but mostly just needed someone to show them love. Later in life, she counseled teenaged girls at a Crisis Pregnancy Center. Only eternity will reveal how many lives—born and unborn—were saved as the result of her listening ear and caring heart.

In fifth grade, the lust for power went to my little head and I signed up for “Safety Patrol.” Now I wielded power over my fellow students in crossing the street. I even had a badge! Unfortunately, I found myself stationed at the farthest outpost, near a swamp which, according to school yard lore, was writhing with venomous vipers! So, I turned in my resignation. But Mom would have nothing of it. “Watkins keep their commitments!” So, the only consolation was knowing that the brutal Michigan winter would keep the swamp creatures at bay. Since then, I’ve stayed with some equally tough assignments and situations simply because “Watkins keep their commitments.”

Our spiritual life revolved around prayers before school, family devotions, Sunday worship, Sunday school and even Sunday night services. Mom and Dad also served as Sunday school teachers, but curiously, never for their oldest son’s classes. But most of all, they put spiritual lessons into practice such as tithing when money was tight and being involved in ministry when time was even tighter. Mom and Dad’s legacy continues today through their children, grandchildren and great-grandchildren.

One thought on “Top ten things my mom taught me”