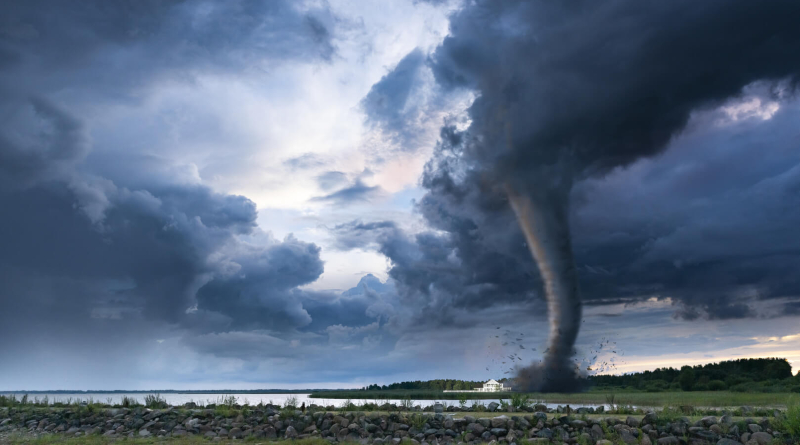 Here’s what I know:

The Fall, as well as the Flood, caused destructive consequences to creation. Before the Fall, there were apparently no weeds, no carnivores, pain in childbirth, decay or even death (Genesis 3). Some argue there was no rain prior to the flood based on Genesis 2:5–6, which describes streams (or mists) watering the ground since there was “no rain.” An additional theory supposes the earth was created surrounded by a protective sphere of water vapor described in Genesis 1:6-8. The collapse of this protective dome could account for the continuous and violent “torrent” described in Genesis 7:11-12.

Paul writes how creation itself is suffering from the Fall and Flood:

For the creation was subjected to frustration, not by its own choice, but by the will of the one who subjected it, in hope that the creation itself will be liberated from its bondage to decay and brought into the freedom and glory of the children of God.

We know that the whole creation has been groaning as in the pains of childbirth right up to the present time (Romans 8:20-22 NIV).

One day, God’s original design will be restored with a new heaven and new earth.

The rain—and natural disasters—fall on the just and unjust (Matthew 5:45)

Hurricane Katrina walloped New Orleans just two days before the annual homosexual “Southern Decadence” festival was to begin in the town, an act being characterized by some as God’s work. Southern Decadence has a history of “filling the French Quarters section of the city with drunken homosexuals engaging in sex acts in the public streets and bars,” says a statement from the Philadelphia Christian organization Repent America.

When Jesus was not welcomed in Samaria, his disciples asked, “‘Lord, do you want us to call fire down from heaven to destroy them?’ But Jesus turned and rebuked them” (Luke 9:54-55). No smoting until the final judgment!

Rabbi Daniel Lapin wrote a helpful essay following 2004’s deadly tsunami that killed 230,000 people in 14 countries. He argues that when God commanded Adam and Eve to “subdue the earth,” he was giving humans two commands:

Our first distinctive cultural imperative is to render ourselves less vulnerable to nature. We believed we were following Divine will when we developed medicine and medical technology to dominate disease. We found insecticides to protect our food supply, and we built dams to control rivers. We knew we were pleasing God by making ourselves safer and more secure, and this knowledge lent added urgency and meaning to our efforts. Not by coincidence did the overwhelming majority of these scientific and technical developments take place in the West.

Civilization’s second distinctive cultural imperative is the importance of preserving human life. This too derives directly from our biblical roots and distinguishes us from the peculiar fatalism toward death found in so many other cultures.

God runs this world with as little supernatural interference as possible. Earthquakes, hurricanes, volcanic eruptions, and, yes, tsunamis happen. It is called nature, which is not always benign. Fortunately, God also gave us intelligence and commanded us to make ourselves less vulnerable to nature. He also implanted in us a culture in which each and every life is really important. Many of those fatalities are attributable to misguided cultures.

For instance, the destruction of Hurricane Katrina cannot be blamed on divine wrath but unwise design. What was French explorer, Rene-Robert Cavelier, thinking when a founded a city below sea level surrounded by a lake, river, and ocean.

So, as Florence inches toward the mainland, humans are buying up supplies, boarding up homes and businesses and bugging out for higher ground. Communities are using earth movers to create sand dunes to thwart the expected tidal surge. And the government and relief organizations are deploying food, water and other resources to serve those affected by the storm. Humans are doing everything in their power to save lives and minimize damage.

So, where is God in natural disasters?

He is with his people

God is our refuge and strength,
an ever-present help in trouble.
Therefore we will not fear, though the earth give way
and the mountains fall into the heart of the sea,
though its waters roar and foam
and the mountains quake with their surging.

He is within his people, who in turn provide food, drink, shelter and clothing to those suffering in the aftermath (Matthew 25:31-40).

And he is using his people to comfort those in trouble with the comfort they themselves have received from God (2 Corinthians 1:3-4).

“Father, protect the people of the east coast of the United States as this major hurricane approaches. May your people provide prayer and practical hope and help to those who will suffer loss. And may your love and trust be evident through your people. Amen.”

If you found this hopeful and helpful, please share on your social networks. Thanks!