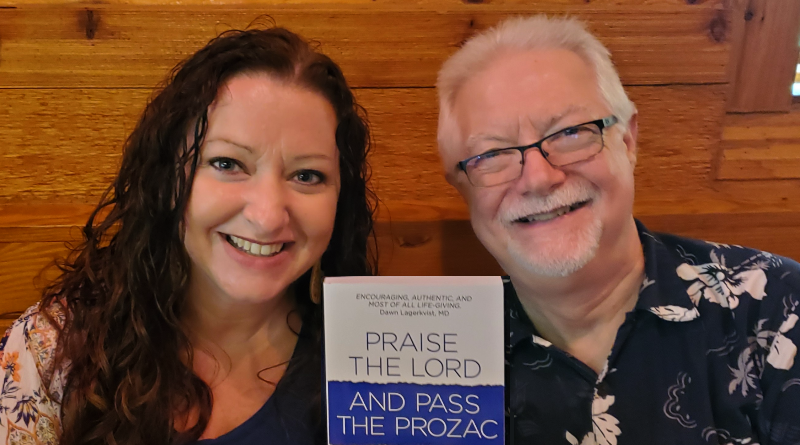 ‘Praise the Lord and Pass the Prozac’
Father-daughter duo’s new devotional book, focused on mental illness, the Bible and how the Church has handled both
Taylor Frymier

With mental health disorders seemingly at an all-time high, author James Watkins and his daughter, Faith Watkins, teamed up to address the issue through a biblical lens while scrutinizing the response from the Church.

The duo says that this is “not a self-help book on mental illness, but a devotional offering ten affirmations backed with Scripture and studies for those of us living with it.” Those ten affirmations include statements such as “I Am Not Alone,” “I Am Planned,” “I Am Forgiven,” and “I Am Empowered.”

“There are people that think they’re alone,” James shared. “So, I guess that’s what really inspired the book, to give that sense of assurance: They’re not alone. They are loved. They are seen. They are planned.”

A licensed clinical social worker and addictions counselor herself, Faith is especially qualified to use her professional experience to inspect the realities of mental illness with her clients’ lived experience with religion.

With James’ lifelong pursuit of theology and as a practitioner of the written word, the pair are sure to have something interesting to say with their book.

“We have a theologian and a therapist,” James said. “That’s a good combo.”

He himself has lifelong experience with clinical depression, ADD, OCD, ASD, “and probably some other undiagnosed initials,” so James found himself ready to write something that may make a difference in others’ lives.

“I think the Church doesn’t know quite how to handle people with mental health issues,” he said. “So, anytime I brought it up, I [was told] I didn’t have enough faith, I had unconfessed sin, or I had ‘stinking thinking.’ So I just stopped sharing it.”

Though James is an award-winning author with 20 traditionally-published books and nearly 3,000 articles written, Faith’s writing and theology experience isn’t quite as extensive. As such, each chapter of the book is divided in two: James’ devotional and Faith’s clinical expertise.

James sent Faith the written devotionals and then she would filter them through her experience, training and practice. “So, a lot of what you see in the book are things that I actually do with clients or I challenge them with,” she said. “Just sharing some strategies, some coping skills, some activities that people can do to help boost their mental, emotional or spiritual health.”

Faith’s experience as a professional therapist has revealed to her the hurt many people suffering from mental illness have felt attempting to find solace in the Church.

“People come to me and have these faulty beliefs about their mental health that they’ve learned from the Church or just culture in general,” she shared. “I love being able to dispel some of those things and let them know that they are okay and we’re going to get through
this.

“It’s liberating,” she said, “for people to realize that this is just part of life. … That they’re not defective or crazy or any of the other things that society would tell them. I love bringing that hope to people.”

Within the book, James makes the argument that many of the biblical heroes were likely sufferers of mental illness themselves. He went on to provide examples like Jeremiah, Elijah and Jonah who are deeply depressed or even suicidal, and like Saul’s eventual suicide.

“God lifts them up as heroes,” he said. “Not necessarily role models, but these are people that God used in amazing ways, and yet they struggled with, apparently, mental health issues.”

“Praise the Lord and Pass the Prozac” is available for purchase through print-on-demand [and Kindle] on Amazon or any other major book retailers.

Follow James Watkins’ work at jameswatkins.com, and keep up to date on Faith Watkins’ work on her second book “Recovering Love” at recoveringlove.com.

* Don’t be too impressed with “number 1 on Amazon.” It means that on one shelf (category) in one store (Amazon), it was the number one seller that day. (I certainly didn’t mention it!)