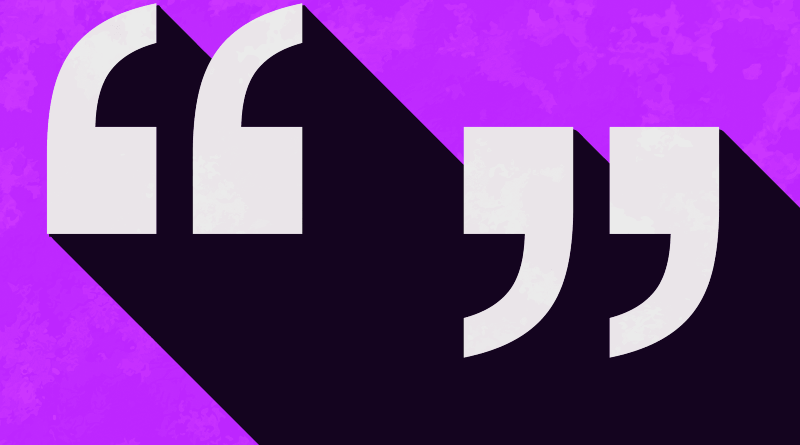 I love collecting clever quotations. Here are some of my favorites:

Frodo Baggins: I can’t do this Sam.

Sam Gamgee: I know. It’s all wrong. By rights we shouldn’t even be here. But we are. It’s like in the great stories, Mr. Frodo. The ones that really mattered. Full of darkness and danger, they were. And sometimes you didn’t want to know the end. Because how could the end be happy? How could the world go back to the way it was when so much bad had happened? But in the end, it’s only a passing thing, this shadow. Even darkness must pass. A new day will come. And when the sun shines it will shine out the clearer. Those were the stories that stayed with you. That meant something, even if you were too small to understand why. But I think, Mr. Frodo, I do understand. I know now. Folk in those stories had lots of chances of turning back, only they didn’t. They kept going. Because they were holding on to something.

Frodo: What are we holding on to Sam?

Sam: That there’s some good in this world, Mr. Frodo… and it’s worth fighting for.
J. R. R. Tolkien in Lord of the Rings: The Two Towers

Nothing in this world can take the place of persistence. Talent will not; nothing is more common than unsuccessful men with talent. Genius will not; unrewarded genius is almost a proverb. Education will not; the world is full of educated derelicts. Persistence and determination alone are omnipotent. The slogan “Press On” has solved and always will solve the problems of the human race.
President Calvin Coolidge

The impossible exists only because one was afraid to chase after their dreams.
Sarah Ruth

Always do right. This will gratify some people and astonish the rest.
Mark Twain

If people are kicking you in the behind, at least you’re in front of them.
Billy Graham

Things may come to those who wait, but only the things left by those who hustle.
President Abraham Lincoln

Failure is the foundation of truth. It teaches us what isn’t true, and that is a great beginning. To fear failure is to fear the possibility of truth.
Joan Chittister

It is not the critic who counts; not the man who points out how the strong man stumbles, or where the doer of deeds could have done them better. The credit belongs to the man who is actually in the arena, whose face is marred by dust and sweat and blood; who strives valiantly; who errs, and comes short again and again, because there is no effort without error and shortcoming; but who does actually strive to do the deeds; who knows the great enthusiasms, the great devotions; who spends himself in a worthy cause; who at the best knows in the end the triumph of high achievement, and who at the worst, if he fails, at least fails while daring greatly, so that his place shall never be with those cold and timid souls who know neither victory nor defeat.
President Theodore Roosevelt

To me, success can be achieved only through repeated failure and introspection. In fact, success represents the 1% of your work that results from the 99% that is called failure.
Soichiro Honda

When I stand before God at the end of my life, I would hope that I would not have a single bit of talent left, and could say, “I used everything you gave me.”
Erma Bombeck

I am not discouraged because every wrong attempt discarded is another step forward.
Thomas Edison

God never simply buries our dead and broken dreams because He’d be burying our hearts along with our dreams. One of two positive things will happen. Either the dream will become fertilizer for something even better, or the Lord will give me the gumption and oomph to bring my dream to fruition. I can’t lose either way!
Noni Joy Tari

That person is a success who has lived well, laughed often and loved much; who has gained the respect of intelligent people, and the love of children; who has filled a unique niche and accomplished his or her task; who leaves the world better than before, whether by a perfect poem or a rescued soul; who never lacked appreciation of the earth’s beauty or failed to express it; who looked for the best in others and gave the best he or she had.
Attributed to Robert Louis Stevenson

I’m glad God has all the answers, ’cause I barely understand the questions.
Barbara Johnson

Some things never make sense, but neither does God’s love.
Patsy Engle

God is never late, but He sure is slow.
James N. Watkins

God is a refiner, not an arsonist.
Neva Coyle

But we have this treasure in jars of clay to show that this all-surpassing power is from God and not from us. We are hard pressed on every side, but not crushed; perplexed, but not in despair; persecuted, but not abandoned; struck down, but not destroyed.
St. Paul 2 Corinthians 4:7-9, NIV

And we know that in all things God works for the good of those who love him, who have been called according to his purpose . . . to be conformed to the likeness of his Son . . .
Romans 8:28-29, NIV

If you think you are too small to be effective, you have never been in bed with a mosquito.
Betty Reese

A river reaches places which its source never knows. And Jesus said that if we have received His fullness, ‘rivers of living water’ will flow out from us, reaching in blessing even ‘to the end of the earth’ regardless of how small the visible effects of our lives may appear to be. We have nothing to do with the outflow . . . God rarely allows a person to see how great a blessing he is to others.
Oswald Chambers

Do not be anxious about anything, but in everything, by prayer and petition, with thanksgiving, present your requests to God. And the peace of God, which transcends all understanding, will guard your hearts and your minds in Christ Jesus.
St. Paul Philippians 4:6-7, NIV