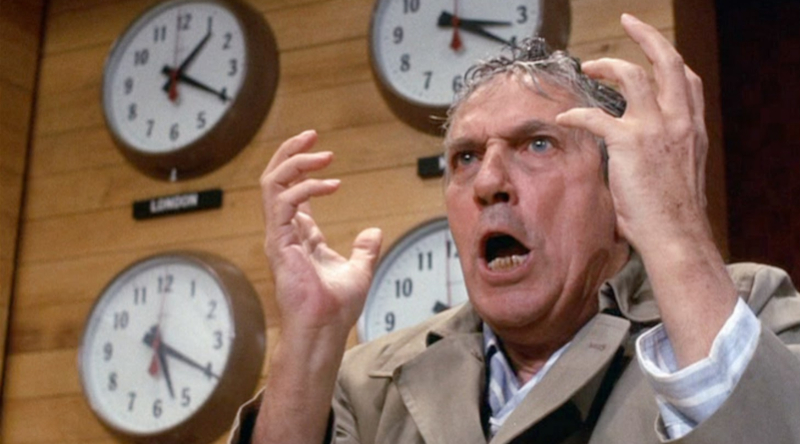 I don’t have to tell you things are bad. Everybody knows things are bad. It’s a depression. Everybody’s out of work or scared of losing their job. The dollar buys a nickel’s worth, banks are going bust, shopkeepers keep a gun under the counter. Punks are running wild in the street and there’s nobody anywhere who seems to know what to do, and there’s no end to it. We know the air is unfit to breathe and our food is unfit to eat, and we sit watching our TV’s while some local newscaster tells us that today we had fifteen homicides and sixty-three violent crimes, as if that’s the way it’s supposed to be. We know things are bad—worse than bad. They’re crazy.

So, you listen to me. Listen to me: Television is not the truth! You’re never going to get any truth from [it]. We’ll tell you anything you want to hear; we lie like hell.

Nope, this is not from from conservative TV or even YouTube, but from fictional TV commentator, Howard Beale, in the movie Network—from 1976. America has been angry for more than 40 years!

It’s time to constructively deal with these issues, not just be angry and mad as hell. Christians who are joining in the angry rhetoric should consider these verses from Scripture:

Fools vent their anger, but the wise quietly hold it back (Proverbs 29:11).

Get rid of all bitterness, rage, anger, harsh words, and slander, as well as all types of evil behavior (Ephesians 4:31).

In every place of worship, I want men to pray with holy hands lifted up to God, free from anger and controversy (1 Timothy 2:8).

Human anger does not produce the righteousness God desires (James 1:20).

James, the brother of Jesus, is so right. “Human anger” is never the solution.

The apostle Paul reminds us, “Do not be overcome by evil, but overcome evil with good” (Romans 12:21).

And the apostle Peter urges us “Pray [for] who are in authority so that we can live peaceful and quiet lives marked by godliness and dignity” (1 Timothy 2:2).

John Wesley, the founder of the early Methodist church, changed the culture of 18th century England, by overcoming evil with good. He provided positive alternatives to slavery, poverty, and prejudice through hard work and the power of the Holy Spirit. It can happen again! Let’s be holy people rather than hostile people!

If this was helpful, please go to your window . . . Actually, share on your social media. Thanks!