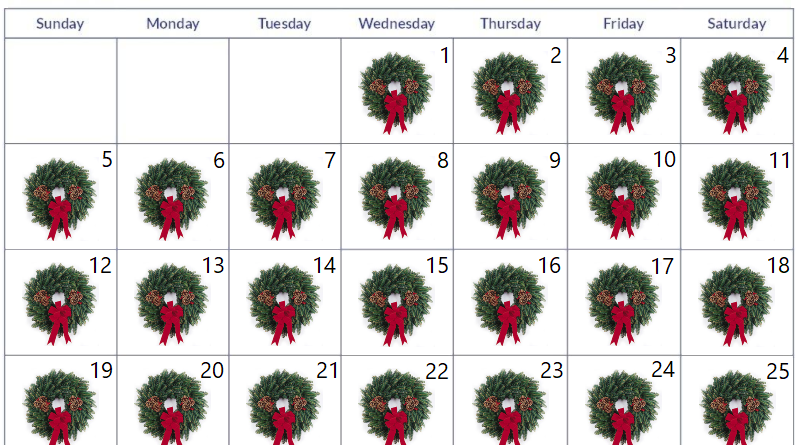 I thought I had seen mass hysteria before: the time “Weird Willy” Smith set off a can of tear gas in the high school cafeteria. Or the practical joker who yelled “Shark!” at the beach causing me and my rubber raft to be flattened by half-crazed swimmers.

But these pale in comparison to entering a department store the day after Christmas! As I stepped into the main aisle I was confronted with see what looked like the entire cast from Ben Hur stampeding my way.

Leading the pack charged a six-foot brute with a Marine tattoo strangling a pastel neck tie. He was followed by a crowd of probably quite normal people who, in the passion of the moment, had turned into a murderous mob storming the customer service desk.

The season of “peace on earth, goodwill toward men” was over for another year—carefully packed away with the strings of lights and artificial trees.

Nearly two thousand years ago, the peace and joy came after Christmas.

God’s people had yearned for their Messiah since He had promised Eve there would come a conqueror over sin. The angels had announced this precious Gift’s arrival. The waiting was over. The real work of Christmas could begin—work which we can continue today.

It would have been easy for the shepherds to merely muse about their evening with eternity. An angel of the Lord had stood before them. The glory of God had shone over these men on a dark, sheep-dotted hillside. Multitudes of angels joined in announcing “peace on earth.” Then the shepherd’s weathered faces had looked into the tiny, helpless eyes of Almighty God.

But this was just the beginning. After the excitement of Christmas, the shepherds spread the Word about this child and glorified and praised God for all the things they had heard and seen.

Christmas is a year-round opportunity for proclaiming, for “glorifying and praising God” for all we have heard and seen.

Simeon, a righteous and devout man who lived in Jerusalem, had been waiting for Christmas—with a much deeper longing that any child anticipating a stack of packages under the tree. The Holy Spirit had revealed to Simeon that he would not die until he saw the Messiah. And so, moved by the Spirit, he entered into the temple courts as Mary and Joseph brought their first born son there for consecration.

Simeon came face to face with “the consolation of Israel.” Taking the child in his arms, he praised God and said, “Sovereign Lord, as you promised, now dismiss your servant in peace. For my eyes have seen your salvation, which you have prepared in the sight of all the people.”

This peace continues after the advent candles are burned to stubs and the last needle falls from the tree. Christmas is a year-round opportunity to experience the Prince of Peace and to share that consolation with others.

The word Christmas originally meant “Christ’s Mass”—a time of worship and adoration of the Messiah. Today, unfortunately, the masses of people pay more attention to holiday shopping and feasting than to Christ. The magi from the East, however, were wise in their priorities. Before they revealed their holiday treasures, they gave their gifts to Jesus and “. . . bowed down and worshiped him.” Well after the uneaten fruitcakes have fossilized, worship of the living Christ must continue if Christmas is to remain fresh in our hearts.

Perhaps meditation is the key to Christmas. The days before Christ’s birth had been a hectic time for Mary and Joseph: dealing with the rumors and suspicions of Mary’s pregnancy, traveling to Bethlehem a midst the tail to tail census traffic, and now the responsibilities of caring for a newborn. But Mary still meditated on the Lord.

Without meditating on the salvation of God and His faithfulness, there can be no proclamation, consolation, or adoration.

Christmas, then, is a year-round opportunity for meditating on all these things and pondering them in our hearts–long after the warranties on our gifts have expired.

Merry Christmas today . . . and every day of the year!