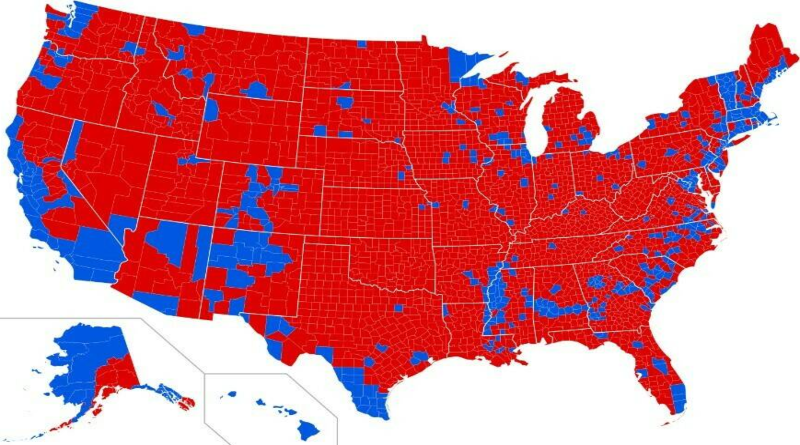 A study by Michigan State University notes: Far From United: Political Divide In America The Worst It’s Ever Been. Researcher and author, Zachary Neal, writes:

Here’s what I wrote for an online magazine in January 2017 following the bitter 2016 election.

The recent election results have revealed just how divided are the “United” States of America. Commentators, pundits and leaders are searching for reasons to explain the deep racial, gender, ideological and political divides.

I blame the Internet. Let me explain before I cause even more division. With the WWW, consumers no longer have to listen to differing viewpoints.

Take the news . . . please. Citizens can choose to get their news and views with a liberal slant on CNN and The Huffington Post or from a conservative perspective on FOX and The Drudge Report. During the Jurassic Age of Journalism, reporters were schooled to stifle their biases and objectively present both sides of an issue. In the modern age, there’s no need to listen to differing opinions and perspectives!

Then, there’s Facebook, Twitter, Reddit and other social networks. Users can choose “friends” who look, think and act like themselves. And if some “hater” offers an opposing view, they are simply “unfriended” and “blocked.” It’s the online equivalent of covering one’s ears and shouting “La la la la la la la!”

Even our institutions of higher learning, which once prided themselves in exploring all perspectives, set up “safe zones” where young adults could avoid hearing anything about the contentious electoral college results that might upset their fragile psyches. Much better to color and make PlayDoh art than to talk out their feelings in the student union or dorms.

The Unique States of America

I propose that there are now thousands of unique, niche states of America. Citizens no longer have to listen to opposing views or interact with people of different persuasions. They simply choose their news and views to reinforce their own tastes, beliefs and prejudices with the click of the computer.

But there is still one place in America where citizens can interact with people outside their cyber cell . . . the Church of Christ! The apostle Paul writes to a truly divided church:

Dear brothers and sisters, I close my letter with these last words: Be joyful. Grow to maturity. Encourage each other. Live in harmony and peace. Then the God of love and peace will be with you. (2 Corinthians 13:11)

And Jesus’ last recorded prayer is for his future followers:

“I pray that they will all be one, just as you and I are one—as you are in me, Father, and I am in you. And may they be in us so that the world will believe you sent me.

“May they experience such perfect unity that the world will know that you sent me and that you love them as much as you love me.” (John 17:21, 22)

The United Saints of America

Church should be the ultimate “safe place,” where citizen who are different from others are accepted and listened to as equal members of The United “Saints” of America. (Remember that Paul called the motley crew in Corinth “saints.”)

A good friend of mine cannot be more different than me. He’s a five-point Calvinist. I’m a Wesleyan-Armenian. He’s a vegetarian. I’m a carnivore. He’s a social drinker. I’m a teetotaler. He’s a ballroom dancer. I’m a clutz. He votes Democratic. I tend to vote Republican. And yet our love for Christ and writing has made us such good friends that we spent three weeks 24/7 teaching writing and staying together in India—without killing each other. The only time there was even a hint of conflict was setting the thermostat. He has no body fat. I have plenty of insulation.

May unity among professing Christians be so obvious that the world will know that Christ is real and is expressed in the love between believers. The Church has, in the past, been the cultural common denominator in this diverse land . . . and it can be again . . . if you and I obey the words of Jesus:

“I am giving you a new commandment: Love each other. Just as I have loved you, you should love each other. Your love for one another will prove to the world that you are my disciples” (John 13:34-35).

• Pray that Christians’ unity, despite the continuing political conflict, reveal a love that is greater than personal political beliefs.

• Pray that American citizens will be at least willing to listen to differing voices.

• And pray that Americans will give newly elected leaders a chance to bring people together to address the many challenges the country is facing.